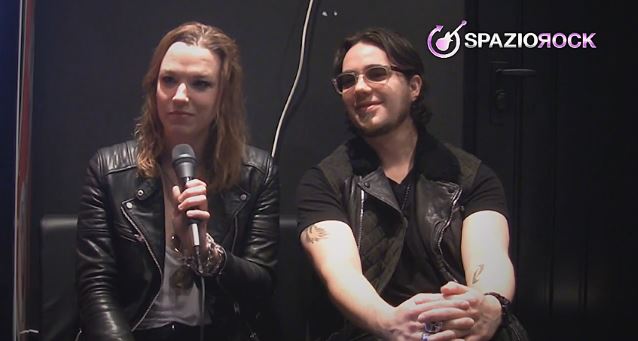 Italian web site SpazioRock conducted an interview with HALESTORM guitarist/vocalist Lzzy Hale and guitarist Joe Hottinger before the band's March 29 concert in Milan. You can now watch the chat below.

Asked if online criticsm and bad reviews have ever caused them to question what they do and contemplate giving up playing music, Lzzy responded: "Oh, hell no!"

Lzzy continued: "If anything, we encourage it. Everyone has a right to their opinion. But we actually get excited about certain people that are so incredibly against what we do, because if… We always talked about this: when we start getting people really passionately hating what we do, that means that we're doing something right."

Joe added: "I love it. I like when they're creative with their hate and really say some descriptive and wrong things. I'm just, like, 'Yeah, buddy! You put some thought into that. Thank you. Thanks for taking the time.'"

Said Lzzy: "We've never, ever even had the notion of… because people aren't gonna like what we do, or maybe this hates us, we've never wanted to give up because of that. That's never even crossed our minds."

Joe offered: "I like what we do, so… whatever."

HALESTORM's third album, "Into The Wild Life", was released on April 14. The CD follows up 2012's "The Strange Case Of…" and is already being described as HALESTORM's most diverse and adventurous record yet.

HALESTORM will begin a North American tour with THE PRETTY RECKLESS on April 22 in Nashville.