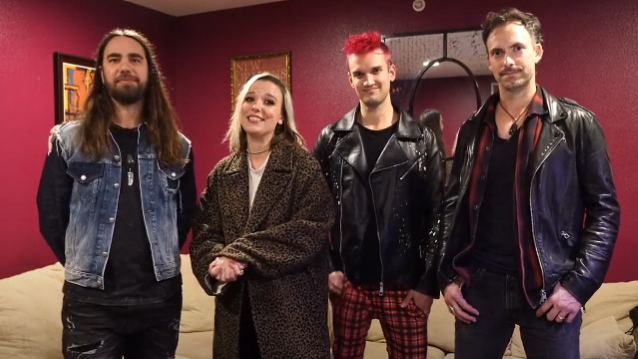 HALESTORM guitarist Joe Hottinger revealed that he and his bandmates had slept in hotel rooms overnight but were awakened early in the morning to find their "bus burning down."

"Old HALESTORM had a night for the books," he wrote on Instagram. "We were all in our HOTEL rooms last night and we woke up to our bus burning down at 3AM.

"No one was hurt.

"The Worcester fire department got there and put the fire out. They were amazing.

"Our fearless security Steve pulled guitars and luggage out of the bay.

"We all lost some stuff, but it was just stuff.

"The investigator doesn't know what started it, but it began in the bunk hall.
What matters is that no one was hurt. The best part is that tonight, we will rock.

"Looking forward to playing some music and forgetting about things being on fire.

HALESTORM drummer Arejay Hale added in a separate post: "Wanted to first and foremost let everyone know we are all safe, nobody was hurt, nothing of great value was destroyed but we had a bus fire last night while we were sleeping in the hotel.

"I woke up to my tour manager, Mike, calling me at 3am to make sure I wasn't sleeping on the bus, our head of security (pictured here) heroically ran into the burning bus with a fire extinguisher to make sure nobody was sleeping in their bunk. According to him, as he looked under the door, the bunk hall was an inferno and he saw 15-20 foot flames rising out of the top of the bus.

"We're all so grateful to the Worcester fire department @worcesterfd for their bravery, and incredibly thankful everyone is ok.

"To all my fellow touring people, take bus fire and all touring safety protocols seriously!! And of course thank all of you out there for your love and best wishes!!

"Come pandemic, snow storms and now BUS FIRES you can't stop us no matter what life will hurl at us! See you at the next show!!!"

HALESTORM singer Lzzy Hale tweeted: "Thank you to everyone for the well wishes. Like Joe said in his post, we lost some stuff, but so grateful that it was only stuff and no one was sleeping on the bus last night. I'm still shook, and emotions are a bit high today. But looks like the universe is not done with us yet!"

HALESTORM is currently on the road with EVANESCENCE as part of the two bands' rescheduled U.S. co-headlining tour dates, which will run through January 21 in Newark, New Jersey.

HALESTORM and EVANESCENCE first toured together in 2012. EVANESCENCE singer Amy Lee later guested on the track "Break In" on HALESTORM's 2020 "Reimagined" EP and Lzzy lent backing vocals to the EVANESCENCE song "Use My Voice" and appeared in the accompanying music video.

HALESTORM is promoting its latest single, "Back From The Dead", which recently became the band's sixth No. 1 at rock radio.

Thank you to everyone for the well wishes. Like Joe said in his post,we lost some stuff, but so grateful that it was only stuff and no one was sleeping on the bus last night. I’m still shook, and emotions are a bit high today.But looks like the universe is not done with us yet!