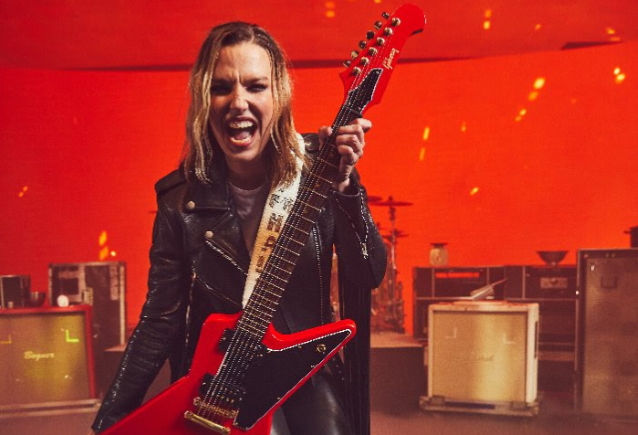 In a new interview with Sweden's RockSverige, HALESTORM frontwoman Lzzy Hale was asked whether she thinks there will ever be a solo album from her. "There might," she responded. "My guys in the band are actually begging me to do that. They're the ones going, 'Hey, you can do a solo album so we can have some time off?'

"I have a lot of songs that are very much… If you're thinking of Stevie Nicks's 'Bella Donna'… You can hear when you're listening to FLEETWOOD MAC and when you're listening to Stevie Nicks's solo records where her voice is in the band," she explained. "FLEETWOOD MAC would not be the same without her, but you can really accentuate that corner of the world of the band.

"I feel like if I were to do a solo record, which I have plenty of songs that have never seen the light of day that I could choose from, you would definitely be able to hear what my specific influence is on the band.

"Yeah, absolutely, I think it most likely will be in the future," Lzzy said about the idea of making a solo album. "Whether it's my decision or the guys are, like, 'You just go!' Either way, it's gonna happen."

This past June, Lzzy was asked during an appearance on SiriusXM's "Trunk Nation With Eddie Trunk" if her bandmates have expressed any reservations about the fact that she alone appears on the covers of HALESTORM's last two studio albums, 2018's "Vicious" and 2022's "Back From The Dead". She responded: "To be completely honest, it's been their idea. For these past few albums, it has not even been brought up by me. It ends up settling in there, and then all of a sudden the guys are, like, 'Yeah, just put Lzzy's face on the cover.' [Laughs] Like, 'Seriously, guys?' And they're, like, 'Yeah, we're fine.' They're not necessarily the most thrilled — well, maybe my brother [HALESTORM drummer Arejay Hale]; he's thrilled to do anything — but they're not the most thrilled to do the photoshoot thing and have their faces and do poses and stuff like that; it's something that I enjoy doing. So they throw that stuff at me all the time. And it goes the same thing with music videos. They're, like, 'Can we just put Lzzy here and do that? Or do we have to do this? Or can we just play our instruments?'

"My bandmates have been so supportive, almost to the point that it's annoying," Lzzy explained. "They're just my allies. They know me better, I think, than most of my own family does at this point. And it's funny to kind of let them — or not 'let them,' but have them want to kind of push me out there, which, obviously, I'm up for the challenge. But there's always the second conversation, like, 'Are you guys sure? We could just do something really crazy.' [And they're, like,], 'No, this is great. We want it to look like a movie poster.' [Laughs] That kind of conversation. And I'm, like, 'All right. Fine. I'll do it.' … They've never had a weird ego about any of that stuff, which is weird. I'm, like, waiting for the shoe to drop here. But we've been here for a long time.

"If any of them ever — and this is just personally for me — if any of them ever raises concerns about that, obviously there'll be an adjustment and a conversation, and it's fine by me," Hale added. "It's just whatever makes everybody comfortable. I've never dictated what anybody wears, what anybody does. We all do this stuff together, just like we always have been."

Two and a half years ago, Lzzy admitted to Kerrang! magazine that there have been times in the past when she been frustrated with being the chief focal point in HALESTORM.

"Every step of the way we're fighting to be ourselves, and to be the best four pillars of this band we can be. In the past we've had people try to pit us against each other, like telling me I should lose the rest of the band and go solo, or that my brother wasn't good enough. We understand that if one of the four goes, it's no longer HALESTORM anymore. That's another reason I love playing live, because we're all there representing ourselves, individually and as a collective, without backing tracks or trickery."

HALESTORM has grown from a childhood dream of siblings Lzzy and Arejay Hale into one of the most celebrated rock bands of the last two decades. Their latest album, "Back From The Dead", spawned two No. 1 hits, including title single, "a biting but cathartic howler about overcoming all obstacles" according to Rolling Stone. "Back From The Dead" is the follow up to 2018's "Vicious", which earned HALESTORM their second Grammy nomination, for "Best Rock Performance" for the song "Uncomfortable", the band's fourth No. 1 at rock radio, and led Loudwire to name HALESTORM "Rock Artist Of The Decade" in 2019. Rounded out by guitarist Joe Hottinger and bass player Josh Smith, HALESTORM's music has surpassed a billion streams, and the band has earned a reputation as a powerful live music force, headlining sold-out shows and topping festival bills around the world, and sharing the stage with icons including HEAVEN & HELL, Alice Cooper and Joan Jett.