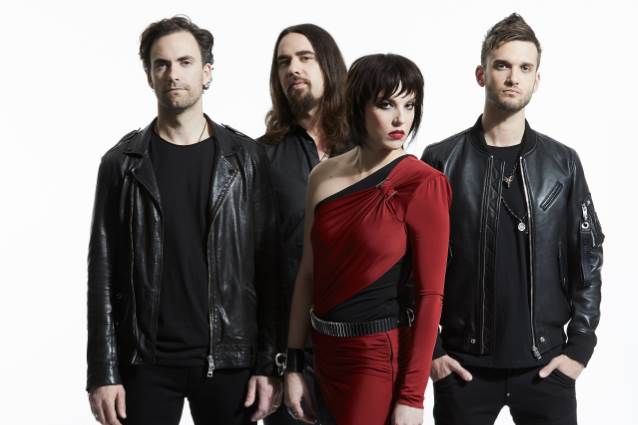 HALESTORM guitarist Joe Hottinger says that lead singer Lzzy Hale has a knack for making the band's fans feel empowered. "She does that; she empowers people," he told the Wichita, Kansas radio stations KICT and KFXJ (hear audio below). "She gets on social media — on Twitter and stuff — and she's just, like, 'Ask me anything,' and she just talks to all these people. It's a pretty heavy thing.

"We live in Nashville and we'll go to these cool rock events that happen in Nashville, and complete strangers will come up to Lzzy and just start crying and telling [her] their life story," Joe continued. "One guy, I guess I would call him, just started bawling on her shoulders this one time earlier this year or the last year. He was, like, 'Hey, I'm transitioning into a man. I haven't been able to tell my parents.' And she was literally the only person that this person [opened up to]. That's intense — really heavy stuff. And all the time, if we go out somewhere, it's just, like, people will just tell her [personal stuff]. It's a weird thing — she must just have a face for that. I'm glad I don't get it personally, 'cause I wouldn't handle it so well. But Lzzy is so gracious and such a sweetheart that it's, like, she handles it well. It's just kind of in her nature; she [feels comfortable] talking to fans and kids that are having a tough time."

HALESTORM's fourth album, "Vicious", was released on July 27 via Atlantic. The disc was recorded last year at Nashville, Tennesse's Rock Falcon studio with Nick Raskulinecz,
an acclaimed producer who has previously worked with RUSH, KORN, ALICE IN CHAINS and DEFTONES, in addition to having produced HALESTORM's third covers EP, "ReAniMate 3.0: The CoVeRs eP", which came out in January 2017.