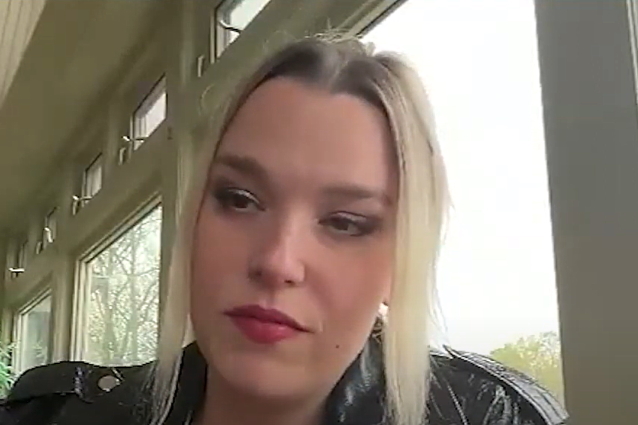 In a new interview with 13th Floor, HALESTORM frontwoman Lzzy Hale was asked how it has been for her and her bandmates to return to performing live after not being able to play any shows for a year and a half during the coronavirus pandemic. She responded (as transcribed by BLABBERMOUTH.NET): "Oh, it's wonderful. You just feel like you're at home. It's also different now — in a good way. I feel like some of the things that we normally would be paying too much attention to, like, 'Oh, did I hit that note?' or 'Did I…?', those normal discussions that usually happen after a show, like, 'Oh, you were too fast with your tempos,' or, 'Maybe I was flat on this note' or something, we're not talking about that anymore. We're just so caught up in the middle of the moment and just trying to live in the present, live in the now. And then after the show, we're just so happy to be able to say that we can still do this and that we're here. And I've noticed that with the audience too; the audience is literally coming to a show like it's gonna be stolen from them again. It's a beautiful time. And I've also noticed a huge drop-off in people using their phones [to take pictures and shoot video], like not paying attention [to the artists on stage]. Everyone just wants to see everything and absorb it. I hope that's a trend that continues on, because it's good to see everyone's faces."

Much of the aptly titled "Back From The Dead" was written and produced throughout COVID-19 lockdown, and, as Lzzy said, "is a journey of navigating mental health, debauchery, survival, redemption, rediscovery, and still maintaining faith in humanity."

The "Back From The Dead" title track was released last August. The official music video for the song, directed by Dustin Haney (Noah Cyrus, Luke Combs) and produced by Revolution Pictures, features Lzzy and the rest of the band in a morgue and cemetery somewhere between life and death.