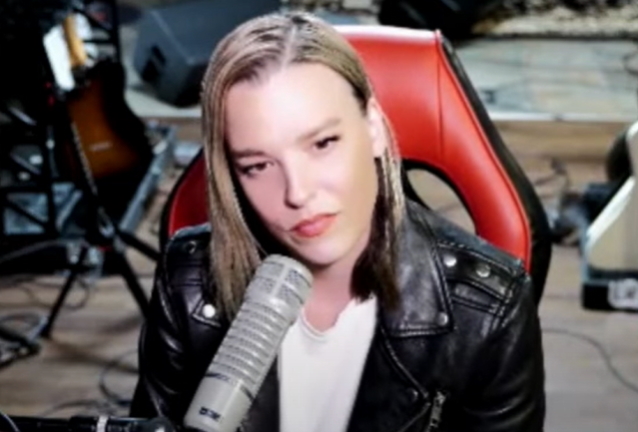 HALESTORM's LZZY HALE On Being Open With Her Fans: 'I've Never Really Wanted To Hide Behind Some Veil'

HALESTORM frontwoman Lzzy Hale joined Matt Pinfield for this week's episode of 95.5 KLOS's "New & Approved" show. Lzzy discussed the process of creating HALESTORM's recently released fifth album, "Back From The Dead", during the lockdown, including its difficulties. She told Matt how she wrote the songs from such a personal state, but that she's amazed to see fans interpret the music into their own perspectives. Lzzy also dipped into her past and talked with Matt about her greatest influences and who she grew up listening to; Ronnie James Dio, CINDERELLA's Tom Keifer, Joan Jett, HEART's Ann and Nancy Wilson, and Pat Benatar were just a few singers/guitarists she has always looked up to. Her dad also affected Lzzy's music taste as a child with his love of 1970s hard rock bands such as DEEP PURPLE, BLACK SABBATH and ALICE COOPER.

Asked about the personal message she shared in June for Pride Month in which she said that she is "unapologetically bisexual" and admitting that she hid her "bisexuality for a long time," Lzzy said (as transcribed by BLABBERMOUTH.NET): "I think that the more that I am open and honest with the people that follow me, and even the people are just discovering me for the first time, it's always better to err that way. I've never really wanted to hide behind some veil or some weird idea that I'm this perfect person or I have everything figured out. It's hard to figure yourself out, and it's hard to find a way to be the truest self that you can be, especially when you're growing up. A lot of the times we know we're different and we don't even know why, or we don't know what to call it, or do we even need the label.

"It was important for me to put that out there in the world because I've had many conversations with specifically young people who are trying to do that and trying to find their place in the world and find their superpower and the things that make them different are that," she explained. "It's important for me to put that out there just as a source of, 'Hey, I'm still here. I made it through. I can be proud of everything that I am — both my light and dark, both my weird and not, my big, my small, my loud, my quiet — and if I can find that place in my journey, then so can you.' And so it's my way of putting some kind of good out in the world."

HALESTORM will embark on a U.S. fall tour with fellow female-fronted bands THE WARNING and NEW YEARS DAY. The trek will kick off September 21 in Huntsville, Alabama and run through HALESTORM's October 8 appearance at Aftershock festival.

Called "a deeply personal effort depicting the band's personal struggles through the last few years of uncertainty" by Alternative Press, "Back From The Dead", produced by Nick Raskulinecz (FOO FIGHTERS, MASTODON, ALICE IN CHAINS) with co-production by Scott Stevens (SHINEDOWN, DAUGHTRY, NEW YEARS DAY),"is a journey of navigating mental health, debauchery, survival, redemption, rediscovery, and still maintaining faith in humanity," according to Hale, named by Revolver as "one of the most charismatic, powerful, and captivating vocalists of our time."