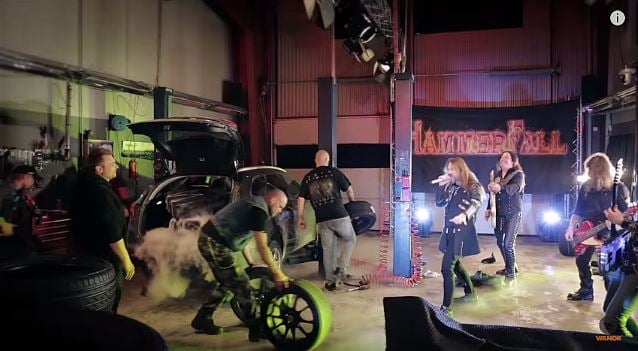 The Vianor Tire Center in Gothenburg, Sweden gave its customers an unforgettable tire-changing experience by having Nokian Summer tires installed on their cars while being serenaded by the Swedish heavy metal band HAMMERFALL.

Vianor knows its customers and many of them are HAMMERFALL fans. So, with the band's cooperation, they planted a hidden camera in a garage where Vianor customers came to get their tires changed. It was at that point that local heavy metal gods HAMMERFALL came out and surprised them with a headbanging performance of the song "Last Man Standing".

Video footage of the experience, which was been viewed over half a million times on Facebook, can be seen below.

Vianor's key competitive advantage is their ability to offer unsurpassed customer experiences based on in-depth client understanding. In this case, Vianor noticed that in the Gothenburg region, heavy metal was a common interest among its customers in a sizable percentage. The members of HAMMERFALL were contacted and a surprise heavy metal pitstop was performed. Happiness ensued.

Commented HAMMERFALL singer Joacim Cans: "It was a great experience being part of this and giving something back to some of our devoted and die-hard fans.

"When Vianor approached us with this idea, we didn't hesitate for a second. We totally loved the idea! The fans were totally taken by surprise and and their reactions ere priceless for us to witness.

"I think this was an unforgettable day not only for the fans, it was a day to remember also for us in the band."

The Hammerfall Pitstop At Vianor campaign was developed by SEK. SEK is part of the Salomaa Group, the largest family-owned marketing and consultancy agency in Scandinavia.