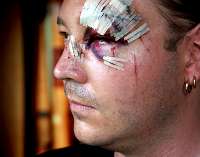 HAMMERFALL frontman Joacim Cans was assaulted with a beer glass at a bar in the group's hometown of Gotheburg (a.k.a. Göteborg),Sweden on Saturday, August 10th and ended up with a cut around his right eye that required 25 stitches to close. As a result, the band have postponed the filming of the video for the track "Hearts On Fire", taken from their forthcoming Crimson Thunder opus, which was scheduled to take place tomorrow, August 14th.

Here is an official statement on the matter from guitarist Oscar Dronjak:

"I am shocked, disgusted and outraged as I write this, an appalling episode took place last Saturday. Joacim got assaulted with a beer glass and had to be sown up with 25 stitches around his left eye. What makes it even worse is the reason for the attack: Joacim was member of HAMMERFALL, a band that the assailant apparently had a problem with musically. Excuse my language, but what the FUCK is up with that? You must be a complete and utter moron with a sick and twisted mind to let it go as far as that! Whatever happened to just ignoring the stuff you don't like? After all, that is always the best way to show your displeasure. For the record, here's the story:

"Joacim was at Rockbaren, a place he as well as the rest of us have frequented more times than I can even begin to remember over the past six or seven years. In other words, we were feeling safe and secure within the walls of an establishment best described as our waterhole in the rock/metal club oasis that is Göteborg. After all, we all love the music, right? Right... On this particular day, however, the environment was anything but safe. The person responsible for the assault was acting hostile already before the incident. Followed by his entourage consisting of two girls and another guy, he approached Joacim and expressed his thoughts on our music (which were very negative, but everyone is entitled to his or her opinion),continued by exclaiming that we all should be executed (a chargeable offense in itself) and finished by spitting on our singer (another offense). Keeping his cool, Joacim managed to prevent it from escalating further, as he simply turned away from the guy. In hindsight, security should have ejected the guy from the premises right away for that. Later, as he was talking to an Australian fan, Joacim glanced over to see one of the girls locking in a chokehold on his girlfriend. Like any other man would have done, he stepped in and separated the girls. Then, from out of nowhere, came the glass and the fist. The next thing he knew was lying in the midst of a pool of his own blood, the music had stopped and the room was filled with light. Unfortunately, the cowardly attacker had run out the door before anybody had a chance to realize what he had done, and thus escaped immediate arrest. Due to the earlier encounter, however, the police have a pretty good description of the guy, who was in his early twenties and of average height, with ash-/dark-blond hair and a southern Swedish accent (from Skåne or thereabouts). He was wearing a black metal T-shirt at the time, which makes it all even more incomprehensible: shouldn't metal fans stick together?

"As a result of the attack, we have been forced to postpone the recordings of the video to 'Hearts On Fire' (new and final released date: September 23rd),which was scheduled to take place on August 14th. A new date is yet to be determined, but it looks like the 19th or 20th are the only options available to us at this point. The stitches will not be gone by then, neither will the swollen and severely-bruised eye. But at least he will get some room to recover from this brutal, craven and highly-condemnable atrocity. Why is it so hard for some people to respect other people's privacy and freedom to express themselves (musically or otherwise)? The incident raises a host of important questions. Who wants to get hurt like this for following and living his dreams? Are we going to be forced to have bodyguards wherever we go from now on? What about public appearances, like autograph signings or guest Metal DJ jobs, should we cancel them in the future? Is it worth it in the end? Despite this recent tragedy, I'd have to say, 'Hell yeah!', if for nothing else than the right to live my life the way I see fit. Nobody will tell me what to do and how to do it, and not even the sad and shocking events of last Saturday can change that. We will always keep the flame burning for the heavy metal revolution!"

To view a photo of Joacim taken in the days following the attack, click here.