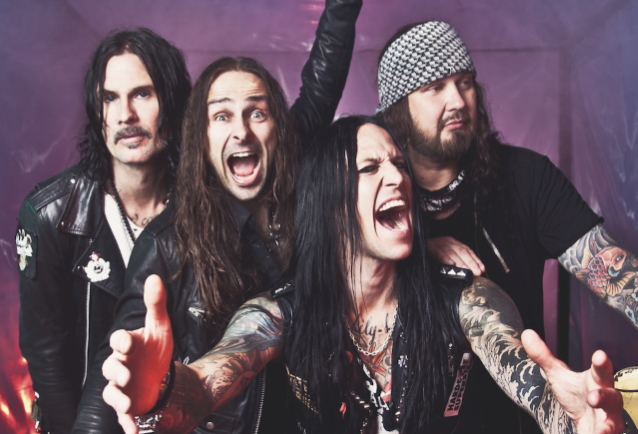 Mark Alexander-Erber, president and founder of Golden Robot, said in a statement: "I have been chasing HARDCORE SUPERSTAR for years, and to finally have them signed for a brand-new album in 2021, we are all over the moon. A fantastic band with a great history and we are honored to be involved."

HARDCORE SUPERSTAR's 11th studio album, "You Can't Kill My Rock 'N Roll", was released in September 2018 via Gain Music Entertainment. The LP was recorded throughout 2017 and early 2018 at the Österlyckan (Wooden Hybrid) studios near Gothenburg. It was produced by the bandmembers themselves and mixed in Stockholm by Dino Medanhodzic.

Asked in a 2019 interview with Roppongi Rocks if he feels he and his bandmates have to write fun, "feel-good" party songs rather than more serious songs, HARDCORE SUPERSTAR singer Jocke Berg said: "HARDCORE SUPERSTAR is synonymous with the word 'feel-good.' It should be fun. It's drinking and toasting. A hell of a pre-party with HARDCORE SUPERSTAR, sort of. The previous album wasn't like that. It didn't end up much feel-good as it was quite dark. But if we wanted to write a TOOL song or something like that, it would not fit in with HARDCORE. We have to be in the musical region where the HARDCORE SUPERSTAR sound lives. In that case, we would have to do it as a side project. I want to do a death metal album. Unfortunately, I can't do that with HARDCORE."

As for how he would describe HARDCORE SUPERSTAR's sound, Jocke said: "The new album feels a lot like arena rock. You can hear QUEEN vibes. SLADE — some obvious vibes. ZZ TOP. I'd like to call it arena rock. That's the kind of vibe we have. It's a big sound. We had QUEEN as a starting point. QUEEN's fantastic. Especially with Freddie Mercury on vocals. We had that arena rock feeling as a starting point. We tried to capture that feeling somehow."