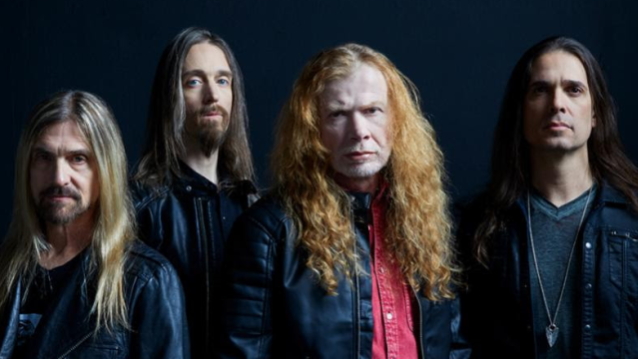 Earlier today, MEGADETH shared a snippet of its rendition of the track on social media and it included the following message: "We've recorded our own rendition of @JudasPriest's 'Delivering the Goods' to celebrate their induction into the 2022 Rock & Roll Hall of Fame. Listen now, exclusively on @AmazonMusic. The #RockHall2022 Induction Ceremony airs on @HBO and @HBOMax November 19th at 8pm ET."

MEGADETH leader Dave Mustaine originally revealed that his band had covered "Delivering The Goods" when he was the featured guest on BBC's "The Rock Show With Johnnie Walker" during the "Rock God" segment this past September. At the time, Dave picked JUDAS PRIEST guitarist Glenn Tipton and stated about his choice: "I had no idea how much Glenn Tipton and JUDAS PRIEST had influenced my guitar playing until I recently covered 'Delivering The Goods' with my band MEGADETH and got to go over all those guitar riffs again. It was really revealing to me how much Glenn's playing had influenced me."

He continued: "Where did I first hear about JUDAS PRIEST? I can't remember exactly — I think it was my brother-in-law's little brother. But I did get my own copy of 'Sad Wings Of Destiny'. And I remember when I was living with my mom and we moved in with my middle sister — I have three older sisters — and she was married to a police officer that was the chief of police in a city called Stanton in California in the United States. And he walked into his house and heard PRIEST blaring in the bedroom I was sharing with their son. That was the first time I ever stood up for metal. And when he stomped out, you know what I did? I put the record back on."

Mustaine first spoke about MEGADETH's JUDAS PRIEST cover during an interview in August with Meltdown of Detroit's WRIF radio station. Regarding how he and his bandmates approached the recording of the track, the MEGADETH leader said: "We went and listened to the song and charted out the performance. And going into that kind of micromanaging of the song, that minutiae production, we started to see a lot of things in the song where it seemed like there was no guide for the song. So we did everything the way that we do our recordings. And I believe it got a little more straightforward with the riffing and everything."

MEGADETH's new album, "The Sick, The Dying… And The Dead!", was released on September 2 via UMe.