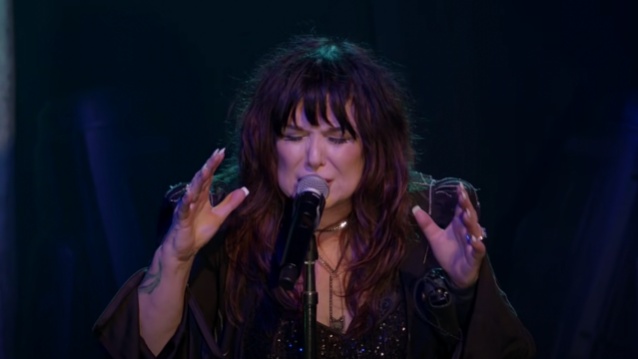 In a new interview with "The Mistress Carrie Podcast", HEART frontwoman Ann Wilson was asked if it's harder to keep a marriage or a band together. The 71-year-old singer, who has been married to Dean Wetter since April 2015, laughed and responded (as transcribed by BLABBERMOUTH.NET): "I think it's harder to keep a band together — in my experience. And I've only been married once and I'm still loving it and feel great about it. It's harder to keep a band together because you have other people coming, like wives and significant others, talking in your bandmates' ears and maybe saying things that pit them against you or against the group unity. It's really hard. It's kind of a revolving door with a band."

Ann's comments come less than a month after her sister, HEART guitarist Nancy Wilson, said that HEART "had a big offer on the table last year for a bigger tour, but Ann wasn't interested in going out with my lineup of guys that we were out with before. She has a new lineup of guys that she wanted me to join up with," Nancy said. "And I sort of [thought] I don't really know them and don't have loyalty yet for anybody like that. So I just kind of shined it on and decided when I do go out with my new singer Kimberly [Nichole under the band name NANCY WILSON'S HEART]."

Ann and Nancy had a falling out during HEART's 2016 tour, when Wetter was arrested for assaulting Nancy's then-16-year-old twin sons in a backstage altercation at a gig near their hometown of Seattle. He pleaded guilty to two lesser assault charges to avoid jail time.