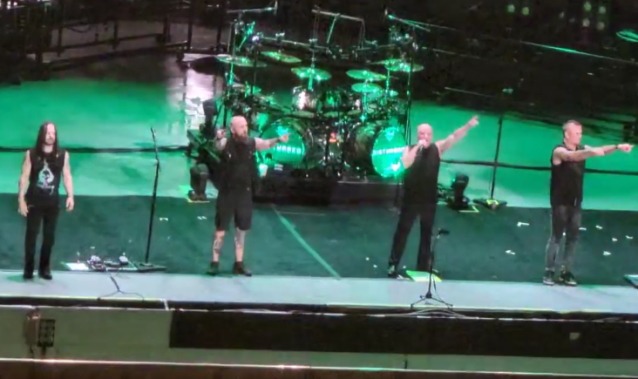 After DISTURBED's performance, Nita took to her social media to share a few photos taken at the event, and she wrote in part: "Well, that didn't go as planned.

"The band flew out to Illinois, rented a van and backline gear, drove 3 hours, had a great soundcheck and were in show clothes warming up and ready to play, but there were crazy thunderstorms all afternoon and when lightning kept striking within a few miles of the venue our set finally got cut.

"We were beyond bummed to be right there and not get to perform but on the bright side, it was fun get to go out to the line and meet some of you guys!!"

In July, DISTURBED released the LP's first single, "Hey You". The official music video for the song was directed by Josiahx. Singer David Draiman called the track "a wake-up call. We've become our own worst enemies," he said. "Civil discourse has become the exception instead of the norm. People have lost themselves in outrage addiction."

"The Sickness 20th Anniversary Tour" was supposed to celebrate the 20th anniversary of DISTURBED's seminal album "The Sickness". On the tour, the band was expected to perform songs off the album, as well as tracks from 2018's "Evolution" and DISTURBED's extensive catalog.

Disturbed performing 'Down with the Sickness' at the Illinois State Fair Grandstand in Springfield, IL on 8-20-2022.

After a 2 1/2 hour rain delay, we finally got to see Disturbed! They skipped the opening band and it was probably a shorter than normal set, but still a great show!!

Finally Disturbed after waiting in the rain,we didn't get to see Nita Strauss !

After 4 hours of waiting, 3 hours of Rain it is time for Disturbed at the State Fair!

Stood in the rain for 2+ hours. We’re a little bit crazy and a lotta bit Disturbed 🤘🏻 #raisonasscheeks

Waiting on the Disturbed concert to start delayed due to rain.

Doors for Disturbed will open at 8pm tonight. There will be NO Track for tonight's show due to this evenings rain. Track...

My pics from the disturbed concert. Overburdened from standing for 2 hours in the rain, I left. Good thing I thought it would be funny to take a picture of people standing in line in hell.

Gates 1&2 are open and are scanning tickets for tonight’s Disturbed concert. Due to lightening in the area concert goers...

We are efforting a 10:15 start time for the Disturbed concert tonight.

Well, that didn’t go as planned 😞⛈

The band flew out to Illinois, rented a van and backline gear, drove 3 hours, had a...