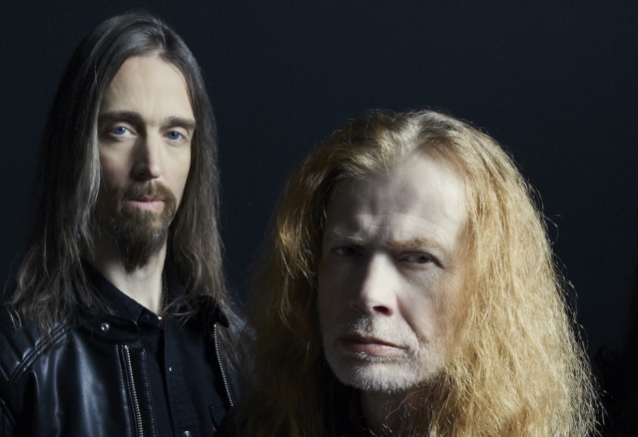 MEGADETH Drummer DIRK VERBEUREN: DAVE MUSTAINE 'Welcomed' My Contributions To 'The Sick, The Dying… And The Dead!'

In a new interview with Roppongi Rocks, MEGADETH drummer Dirk Verbeuren spoke about his contributions to the band's upcoming album, "The Sick, The Dying… And The Dead!", which will arrive on September 2 via UMe. The follow-up to 2016's "Dystopia" marks Dirk's first studio recording with MEGADETH, having officially joined the group six years ago. He said: "I do feel that I was able to express myself on the new songs. Dave [Mustaine, MEGADETH leader] welcomed Kiko's [Loureiro, guitar] and my contributions as writers and performers. He left a lot of freedom for us to experiment during the writing and in the studio, and so we worked together to explore new ground. It was hard work, but also a lot of fun.

"I like to bring my ideas to the table, of course, but it's equally important for me that I give MEGADETH fans, of which I grew up being one myself, everything they've come to love about the band," he explained. "To me, that means not just playing to the best of my abilities, but also understanding what constitutes a good MEGADETH song, as well as how previous drummers like Gar Samuelson and Nick Menza's approach contributes to each song. In that regard, the three years spent touring for 'Dystopia' and playing those classics taught me a lot. Day after day, I absorbed what the MEGADETH sound is about and where the drums fit into that sound. Dave really helped me by inviting me to study every nuance of every drum part. I've always loved Gar's and Nick's styles and it's great to be able to follow in their footsteps."

Verbeuren had been playing with SOILWORK for more than a decade before joining MEGADETH in 2016 as the replacement for Chris Adler (ex-LAMB OF GOD),who called Dirk "probably [one of the] top three drummers in the world."

Earlier this month, Mustaine told the "Appetite For Distortion" podcast that "it's been a breath of fresh air" to have songwriting input from other members of MEGADETH on "The Sick, The Dying… And The Dead!".

Dirk previously discussed his contributions to "The Sick, The Dying… And The Dead!" in an interview last month with Andrew Daly of VWMusic. Speaking about the recording process, Dirk said: "There was some tension for me, because it was my first time doing this with MEGADETH. I didn't really know what to expect as far as how things would go with the songwriting and just being in the studio, so I was a little bit apprehensive at first. But, actually, even though we took a lot of time, things went smoothly overall. I mean, of course, the pandemic hit, and that slowed us down, and not long before that, Dave had his cancer diagnosis and had to get treatment, which happened pretty much in the middle of our songwriting. He soldiered on for a while, but then he had to take a break because treatment became too heavy for him. So, throughout all that, I learned that just listening and being there was a key thing. It's just like what I said earlier because Dave really has a very clear vision of where he wants to go musically, and lyrically. So for us, the biggest thing was to be able to understand that so that we could complement what he wanted to do.

"The thing is, Dave asked us all from the get-go to contribute our own ideas, which we did, including myself," Dirk explained. "I wrote a couple of songs and some riffs for the album, and two of the songs ended up making it onto the album. It's cool to be in a band with such a great legacy that I grew up listening to, and then to contribute to that, not only on the drums but also songwriting-wise, it's a really exciting thing. I think the challenge was really to find my place in the studio, which is a natural thing over time. But again, it's also something that I've had experience with in the past when I was working with different people, who have different viewpoints and different demands. I just wanted to make Dave feel comfortable and make him feel like whatever he needed on drums, that I had him covered. The recording itself went very smoothly, and it was a lot of fun. We did that in the middle of a pandemic, so as far as the drums went, it was really quick, and Dave was super enthusiastic the whole time, as well as the other guys."

Dirk also talked in more detail about the two new MEGADETH songs that he contributed ideas to, "Life In Hell" and "Night Stalkers". He said: "When it comes to 'Life In Hell', that's roughly based on a demo that I wrote at home. I just picked up the guitar, put something together, and added some drums and bass to that. Then I took that to Dave, and he reworked it together with me and with other guys, and it eventually turned into the song that's on the record. When it comes to 'Night Stalkers', that's a song that I had a riff laying around, and it just fit the song. It's funny because the story behind that riff is that I was at Dave's house; I think it was during one of the very first times I went there to go work with him on some ideas one evening. So I just picked up his guitar and this riff just kind of came to me, and that's the riff that ended up in the song. Everybody in the band thought it was a good riff, and that we had to use it. For me, that's exciting, because both of those songs are very much connected style-wise to the older MEGADETH. It's cool because that's the stuff that I grew up with, and for me to be a part of bringing that element back to the album full-on, that's something I'm very excited about. This being said, I don't think that we were looking backward, and I think this sounds very much like a modern album. But, you know, we're kind of just embracing the whole history of the band, I would say."

The first song to be released from "The Sick, The Dying… And The Dead!" was "We'll Be Back", which was accompanied by the world premiere of "We'll Be Back: Chapter I", a short film chronicling the origins of MEGADETH's mascot Vic Rattlehead. Produced by Mustaine, "We'll Be Back: Chapter I" is a soldier's tale of bravery, personal sacrifice, and the will to survive. It was the first installment of a trilogy of videos to be released in conjunction with the release of "The Sick, The Dying… And The Dead!"

"The Sick, The Dying… And The Dead!" reunites Mustaine with co-producer Chris Rakestraw (DANZIG, PARKWAY DRIVE),who together helmed 2016's "Dystopia". The new album was recorded at Mustaine's home studio in Nashville, Tennessee, with Loureiro and Verbeuren. Bassist Steve DiGiorgio temporarily stepped in to record the album. With the kick-off of MEGADETH's recent tour, MEGADETH alumnus James LoMenzo rejoined the MEGADETH family as permanent bass player.