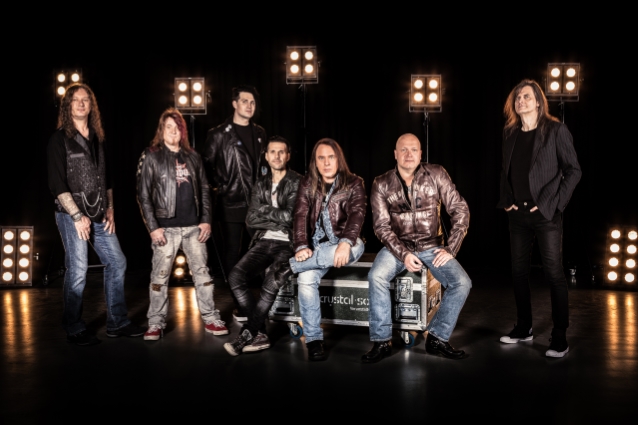 HELLOWEEN Bassist: 'You Can Only Do The Best Thing If You're In Love With What You're Doing'

On whether HELLOWEEN has any new material written in preparation for their recently-announced reunion studio album which is due in 2020:

Markus: "No. Since we've been busy with touring, everybody, each individual member, of course, has ideas. For example, me, if I have a melody in my head, I put it directly on my mobile [phone]. I collect ideas and before we start writing, I will listen to it and 80 percent goes directly to the [trash] bin and the other 20 percent I will take bits and pieces and make songs out of it. I'm sure everybody has ideas individually, but we didn't start to write songs yet. We are coming up with ideas then everybody starts writing songs, lyrics and riffs, then just parts, then we're going to sit together, listen to it and decide what's good, what's worth working on, what's worth checking it out and all that stuff. Now we have two more members. We've never done a record like this. This process may be a little bit different when they bring in their influences. It can be very interesting. It can be very refreshing."

On putting together the setlist for the "Pumpkins United" tour:

Markus: "We've been struggling all the time. We have so many songs and there's still so many songs that we could squeeze in. You cannot really do four hours, which is interesting because knowing there is a record coming out next year or whenever, at least starting next year, there will be another tour. Another tour means you can squeeze in songs that you didn't play on this one. There's still a lot to do."

On the band's 1985 "Walls Of Jericho" debut studio album:

Markus: "We wanted to impress people, you know? If you do only being melodic, tons of bands are doing it, some are really, really good, of course. Only doing thrash, a lot of bands are doing this. Some of them are really, really good, but then, nobody would listen to something that's already there. You do it in a very, very good way. We wanted to combine all those. We found it's much more interesting if you kind of mix and be open to a lot of melodies and harmonies and still playing, still giving it that thrash. We're not a thrash band, but giving it that speed and approach. Then, on the 'Keeper [Of The Seven Keys Part] I', some people were already about to kill us when we came out with the songs, but we just loved it. We just loved to do it. We just said, 'It was the right move.' We never doubted because we liked it. You can only do the best thing if you're in love with what you're doing. Then there's nothing wrong with it. Some people kind of don't like it, but you can't satisfy everybody. Yeah, some said 'You betrayed metal!' So what? Life's long. You got to do something [different]. [Laughs]"

On the impact Gerstner and Löble have had on HELLOWEEN since they joined in 2002 and 2005 respectively:

Markus: "Of course. You got another guy in. You got two new guys coming in. Of course, they bring their influences. First, you have to find how you fit together, but then you're writing material, you play together and you can see it growing together. That's a very fun thing if you can get new people. You see them play, then you play some old songs together which is actually there already, but, still, you have a different guitar player or different drummer. You have to stick a little to what's there already on the songs, but then it gets very interesting when it comes to new songs. They can free their minds and they can bring some new stuff by the way they play. Then, you create new songs with people sounding different."

On whether he thinks the current formation of HELLOWEEN, including Kiske and Hansen, will continue for years to come:

Markus: "Yes. I don't think we need anymore singers. I think we have enough of them. [Laughs] We have enough guitar players. I would never ever let a bass player come in. [Laughs]"

On the success of fellow power metal bands such as BLIND GUARDIAN and STRATOVARIUS:

Markus: "We got a good scene in Germany. That's what I really like, in Europe, we have loads of festivals. We played the whole season from April, May, up until September in Wacken. We had even more after Wacken. Almost each weekend, we have one or two festival shows and that's when you see all these people. Otherwise, they're touring over there, everybody's touring in some different places. But in a festival, they come out together and share a beer and go 'Haven't seen you for a while!' I like that atmosphere with all the other bands who are really good friends. I see them and we celebrate sometimes. I like that."

HELLOWEEN recently completed a run of North American shows that will be followed by additional dates in Latin America. The final "Pumpkins United" concert of 2018 will take place in Hamburg, right where all the madness started in 1984, at the legendary Sporthalle on December 22.