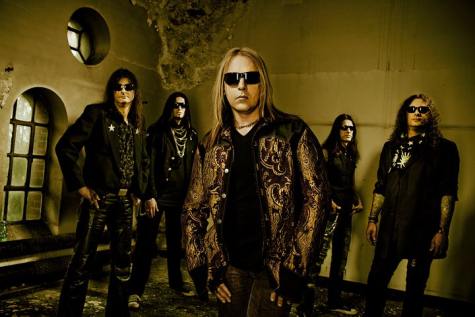 German power metallers HELLOWEEN are working on the follow-up to 2010's "7 Sinners" for an early 2013 release.

Says HELLOWEEN guitarist Michael Weikath: "Right now we are busy with finalizing the songwriting process and are getting ready to take the accumulated ideas into a final selection for the new record. Everybody in the band is excited and eager to take what we have worked on so far to the next level."

HELLOWEEN's new album will once again be helmed by long-time producer Charlie Bauerfeind and will contain "all the trademark" elements on the band's sound," according to a press release. "Already in this early stage the new effort promises to be much more than a fine follow-up to the highly acclaimed 'Gambling With The Devil' and '7 Sinners' albums. Bombastic epic pieces have been worked on as well as ultrafast heavy songs and mid-tempo anthems."

"7 Sinners", the 13th studio album from HELLOWEEN, sold around 1,900 copies in the United States in its first week of release. The CD landed at position No. 7 on the Top New Artist Albums (Heatseekers) chart, which lists the best-selling albums by new and developing artists, defined as those who have never appeared in the Top 100 of The Billboard 200.