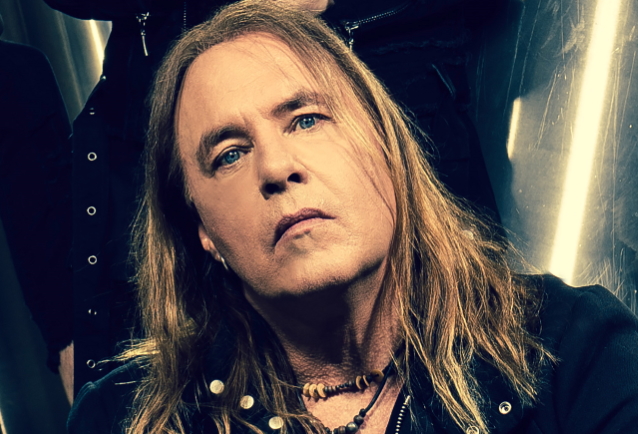 HELLOWEEN singer Andi Deris, who lives in Tenerife, the largest of the Spanish Canary Islands, spoke to Mayra Dias Gomes of Brazil's "Lokaos Rock Show" about how he has dealt with not being able to play shows for nearly two years during the coronavirus pandemic. He said (as transcribed by BLABBERMOUTH.NET): "Well, we've been in the lucky situation of actually being in the middle of a production [of our new self-titled album] when the pandemic hit. So all my fellow musicians here in the band, we did not even realize that there's something bad going on in the world because we've been, as always, in lockdown in the studio. [Laughs] We were in our own lockdown. As with every production, you're kind of in your rabbit hole for [a few] months…

"After [each] production day, we sat there at two o'clock in the morning, listening to the news and watching German television, Spanish television — you go through BBC, you're watching CNN and you try to get a picture what's going on in the world and read between the lines, 'cause each and every news [report] was different," he continued. "But there was one common thing: there's a bloody pandemic going on. People were scared to death, and everybody thought, 'Okay, we'll all be dead by tomorrow.' [Laughs] Over here in Spain, because the Canary Islands are part of Spain, everybody had this [feeling of], 'The new Spanish Flu again.' … Everybody thought, 'Half of Spain will be eradicated by tomorrow.' So everybody had this big stomach thing going on, 'Oh, shit. Don't go out.'

"But for us, actually, that whole pandemic thing, the feeling that I just described, it hit long after the pandemic was actually being announced," Andi added. "So, for us, it was, like, 'Okay, you're here anyway. So, whatever goes on in the world doesn't affect us.' As always, in production we're in our own bubble. And even if there would be World War III and the Germans again invade the moon — whatever — we don't care. We're here in the studio. Okay, [we do care] because I am a German. Okay. That was a bad example. [Laughs] Forget it. [Laughs] "

This past June, the new LP from the reunited expanded classic lineup of HELLOWEEN entered the official album chart in the band's home country of Germany at position No. 1.

HELLOWEEN's new album saw the legendary German power metallers going "back to the roots," with the band recording fully analog and Löble playing the drum kit previously used by HELLOWEEN's original drummer, the late Ingo Schwichtenberg, on the legendary "Keeper Of The Seven Keys" recordings.