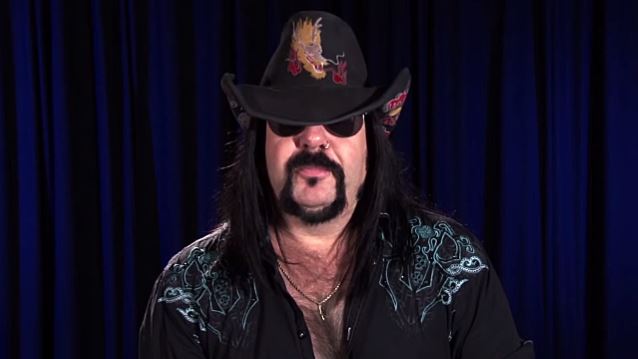 HELLYEAH To Begin Work On Fifth Album In Early 2016

Crazy G of NewEnglandConcertReviews.com conducted an interview with former PANTERA and current HELLYEAH drummer Vinnie Paul (pictured) when HELLYEAH played at DCU Center in Worcester, Massachusetts on May 8. You can now listen to the chat in the YouTube clip below. A couple of excerpts follow below (transcribed by BLABBERMOUTH.NET).

On the making of HELLYEAH's fourth album, 2014's "Blood For Blood":

"It was a really trying CD at first. We knew we had a couple of bandmembers that really had lost their focus and were becoming a detriment to the band, so we parted company with [bassist] Bob ['Zilla' Kahaha] and [guitarist] Greg [Tribbett]. And myself, Tom [Maxwell, guitar] and Chad [Gray, vocals] wrote the record. I think we made the most intense HELLYEAH record ever. I think we made the ultimate HELLYEAH sound — what we had been looking for from the start. And we brought Kyle [Sanders, bass] and Christian [Brady, guitar] in to complete the band, and it's never felt better; it's truly a brotherhood. And we've been out slamming it on the road, man. So sometimes it takes a little bit of time for certain things to fall into place, and everything kind of fell into place with this record."

"We've worked very hard from Day One, [since] this band started, and we haven't slowed down, we haven't stopped, and we don't intend on it. We're not 25 years old anymore, so we don't have any time to waste. We really enjoy what we're doing, and luckily, all of us are in great health right now, happy and loving what we're doing. And the stage is what we live for, man."

"We really, from the start of this record ['Blood For Blood'], wanted to do a complete two-year touring cylcle, which we really haven't had the opportunity to do with any of the previous HELLYEAH records. We would put a record out, tour for a year and go right back and start working on another one. And so we're finally getting into the second year of touring for this record, and it's just starting. After this tour, we go straight to Europe, where [we'll be] for a month, and as soon as we get back from there, we do [Rockstar Energy Drink] Mayhem [Festival] all summer with SLAYER and the mighty KING DIAMOND, which is gonna be an absolutely amazing tour; I'm really looking forward to that. And as soon as that's done, we go to Australia and New Zealand, Japan and Indonesia, and then we come back and we do another run here early next year, which will be our final run, and then we start working on a new record."