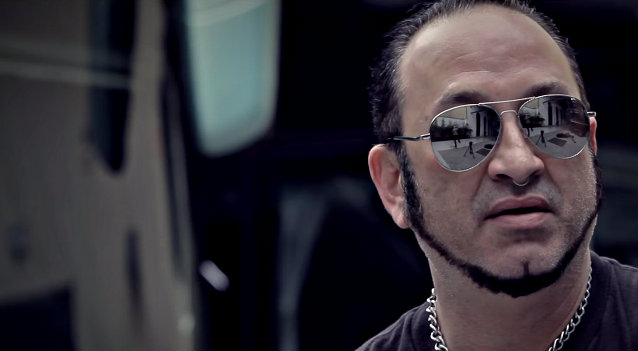 HELLYEAH guitarist Tom Maxwell has revealed that he has already begun composing material for the follow-up to the band's 2016 album, "Unden!able". "I'm already there, yeah," he told Metalshop TV in a new interview (see video below). "I'm already thinking next record. I'm already starting to write. [I'm] not quite there yet."

He continued: "I'm weird when it comes to writing music. It's, like, I can't just do it… I mean, I can — I can sit down and probably write a song every day — but it doesn't mean it's gonna be any good. And I really have to… My head's gotta be right. I've gotta want to write songs. It's almost like your guitar calls you. And when I don't hear that call, it's not time."

Maxwell also confirmed that HELLYEAH will once again work with producer Kevin Churko, who helmed "Unden!able" and 2014's "Blood For Blood" record. "Yes, I hope so, yes," the guitarist said. "I don't wanna work with anybody else. [He's] kind of like the sixth member.

"For me, producers… It's a loosely thrown around word," he continued. "In my opinion, most producers are just glorified engineers. They know how to do good sounds, but a good producer, to me, is a composer who can bring ideas, who can help you re-write your song five or six different ways. And that's a good thing to have. I welcome feedback, and I welcome other ideas. It just inspires me. You might not like it, you might like it; you've just gotta try it and see if it works.

"So, yeah, the next record, I'm sure we're gonna be back in the studio with Kevin and it's gonna be just like what we're doing now — moving forward, [recording the] same heavy [kind of stuff]. Up and down, and giving people a journey."