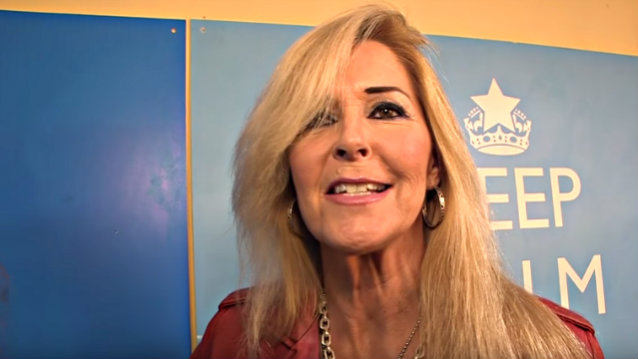 LITA FORD Says American Media Likes To Pick On Her

HRH TV conducted an interview with '80s hard rock queen Lita Ford at this year's HRH AOR festival, which was held last month in North Wales. You can now watch the chat below.

Speaking about all the "crap" the media has given her over the course of her four-decade career, Lita said: "I think the media has changed, along with a lot of the other things in the music industry. Not just the music industry, but in the world — the world has changed over the years. And a lot of the journalists have become… they like to pick on you. And because I'm a female and because I am who I am, it's like I'm… they wanna pick on me more — especially in America. And it's, like, 'Guys, c'mon!' [They] pick on stupid things. Think about the music. Do they pick on Robert Plant and Jimmy Page? C'mon! No."

Lita recently said that she had "a lot of songs written" for her new studio album, to be released early next year. Helming the project once again is guitarist/producer Gary Hoey, who previously worked with Lita on 2012's "Living Like A Runaway" disc. She told Uber Rock: "We've just gotta get into the studio and now take [the songs] from the demo form and put them into the master form. We still have a little ways to go."

Ford told VintageRock.com in January that her next album would be "dark" and "riffy" with "lots of guitar." She added: "I'm gonna really let the guitar flow on this one. So that's exciting."

Ford's last release was 2016's "Time Capsule", a collection of songs that were recorded by Ford in the past, but never before made available. "Time Capsule" was tracked after her 1988 "Lita" album — a time when, as Ford put it, "we had a break between recordings and it seemed so many of us were always in the same place, at the same time." Some of the album's featured guests: Billy Sheehan (bass),Rodger Carter (drums),Dave Navarro (mandolin),Jeff Scott Soto (vocals),Rick Nielsen and Robin Zander (backing vocals) and Gene Simmons (bass).