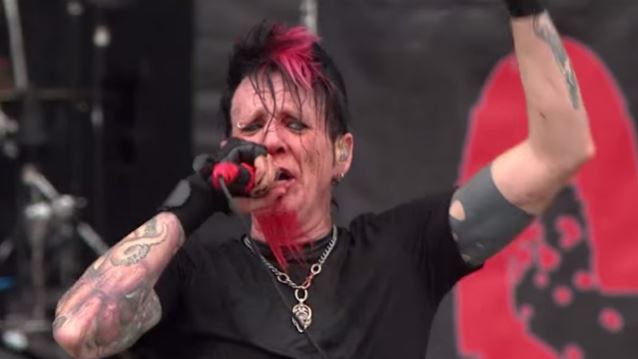 HELLYEAH's CHAD GRAY: 'Metal Is Not Safe; It's Nonconformist'

Howie D. from Hard Edge Radio and National Rock Review recently conducted an interview with HELLYEAH and MUDVAYNE singer Chad Gray. You can now listen to the chat using the audio player below. A couple of excerpts follow (transcribed by BLABBERMOUTH.NET).

On what he would still like to accomplish with HELLYEAH:

"I just wanna fucking… I wanna do my thing, and I wanna fucking… I wanna continue this legacy that I'm talking about that's been going on for so long. It's really fucking important to me. There's a lot of shit out there and a lot of things out there that are trying to dumb music down. And it's frustrating as an artist, it's frustrating as a metal kid, it's frustrating as a metal fan. You know what I mean? I think people have intentions and I don't think that the business people's intentions are the best. They certainly don't support the listener as much. The business and the fast-food world is fucking dumbing music down, and it's fucking sad, and people need to stand up and kind of reel themselves in. I know I have. But I'm a fan of buying records, I'm a fan of whole albums, I'm a fan of bodies of work. A single is just one single. It's like looking at a puzzle, and the puzzle is made up of ten or eleven pieces, or twelve pieces, and you're trying to look at the picture that the puzzle creates by looking at one piece. It's not the way music is supposed to be listened to. It's certainly not the way metal music has been made to listen to. Metal music is not easy. It moves and it flows and it ebbs and fucking… If you look at a landscape painting, it's, like, 'Ah, that's easy' and shit. You look at a Jackson Pollock [painting], and it's, like, 'What the fuck?' You've gotta wrap your head around it a little bit. That fucking vanilla music that's just completely safe, that's not metal. You know what I mean? And that's what I love about metal: metal is not safe; it's nonconformist. And that's why I think… My goal right now is to just remind metal kids: don't just follow suit. Stay on your path and continue to fucking support heavy metal — however that is. You know what I mean? Don't let people dumb it down to where it doesn't mean anything."

"[It's been] fucking great. We heard this was bad [with a turnout of] four thousand people, and it's, like, 'Fuck!' If we play in front of four thousand people, [it's] a win. It's a fucking victory. When we go out on our own, we can play [to] anywhere between nine hundred and thirteen hundred people, so, to me, this is a goddamn gift. And, like I said, this is 'Big Four' shit. We're playing in front of fucking metalheads that have been listening to metal for thirty fucking years, that wouldn't go to a HELLYEAH show, or wouldn't go to a fucking MUDVAYNE show, or any of the current fucking heavy bands. They're here to see fucking SLAYER. I have the opportunity to play in front of those people. And we come to impress. We come to fucking… We bring everything we've got, we give every bit of fucking energy we have. I'll lay it out there as hard as I can, and I wanna create that fucking family aesthetic that I believe that we are, as a community of fucking heavy metal fucking people."

On what he thinks about the idea of having a classic metal band like JUDAS PRIEST headline a future edition of the Rockstar Energy Drink Mayhem Festival:

"I think that'd be great — to keep those fucking legacy bands fucking a part of this; like, th people that created it: the MAIDENs of the world, and PRIEST, and stuff like that. I mean, that's the history. As long as those dudes can still do it, which they can absolutely fucking do it. They still have validity; I mean, they're still real. They should definitely be a part of this. That's what this festival really is: it's, like, the old versus new. Your younger up-and-comers, second-stage bands, the WHITECHAPELs and stuff like that — fucking great bands, you know what I mean? Those are the guys that the torch gets passed to. And it's the evolution. And that's the thing. It's, like, you start at the beginning. And everybody can have that argument: who was the first metal band? I mean, you can ask ten different people, and ten different people will tell you ten different bands. But it doesn't matter, because heavy metal evolves by people taking… People take their influences, they process them in such a way and it comes out something different."

HELLYEAH drummer Vinnie Paul Abbott recently revealed that the band will enter the studio in October with "Blood For Blood" producer Kevin Churko to begin recording its new album for an early 2016 release.

"Blood For Blood", was the band's first release since parting ways with guitarist Greg Tribbett and bassist Bob "Zilla" Kahaha in 2013.

The new members of HELLYEAH are bassist Kyle Sanders and guitarist Christian Brady.