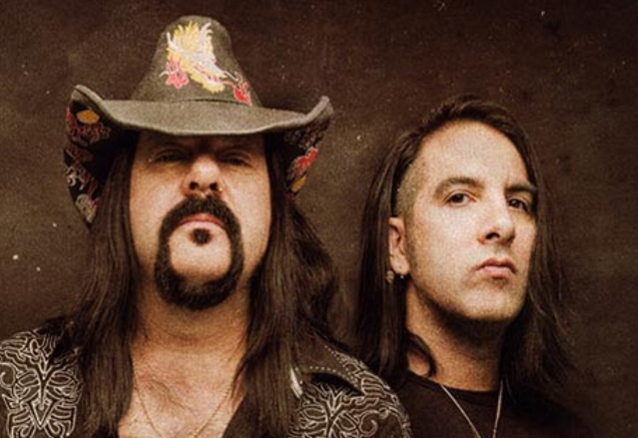 At the end of last year, HELLYEAH guitarist Christian Brady made an appearance on the "Rock Detention" podcast during which he opened up about the passing of the band's drummer, Vinnie Paul Abbott. The former PANTERA member died nearly three years ago at his home in Las Vegas at the age of 54.

"Losing Vinnie the way we lost Vinnie was probably one of the worst moments of my life," Brady said (as transcribed by BLABBERMOUTH.NET). "First off, Vinnie was everything HELLYEAH. He loved that band. He loved his band, he loved his guys, he loved being on the road, he loved touring — he loved everything about it still, man. He wasn't one of the guys that saw glory at one point and was just, like, 'Yeah, I still wanna play, but my heart's not really [in it]. Yeah, whatever. I'm here.' He lived and breathed it, man, and he believed in that band. And he wanted to see it again. And he wanted us to be able to see it with him. So when he lost him, the bottom kind of fell out — it absolutely fell out.

"It's been a long, hard recovery, man. I don't think any of us truly recovered from it — honestly," he admitted.

STONE SOUR drummer Roy Mayorga stepped in as Vinnie Paul's replacement for the touring activity in support of HELLYEAH's sixth album, "Welcome Home", which came out in September 2019.

"We were in a position going in and doing that record — what ended up being 'Welcome Home' — and it was set up to be a big record for us, Christian recalled. "It was the third record we'd done with [producer] Kevin Churko. The last record had seen quite a bit of success, so we were looking forward to getting this one done and out and seeing what came from that. And, of course, Vinnie had finished his tracks — his drum tracks and everything — and it was kind of a slow-going process; there had been some delays and studio complications and things. But he passed not long after his tracks had been finished, very unexpectedly. So we had to deal with, first and foremost, that. And then we didn't have much time, and we had go back into the studio, 'cause if we didn't go in, we would have lost the time to do it. So we ended up going in and finishing the record, which we knew we had to do, because it was his last piece of work. We felt like we had to do it — number one, for him, and for the fans, because they deserve to hear it, 'cause he had played great on it. So it was really hard, man. And we went in and finished the record and gave everything we had to it. And then after that, we released the first single, and we put together a memorial tour, and we did two legs of that. We were slotted to do a third leg, although I don't believe we were gonna do it as a memorial anymore. We did two runs of that — kind of all A and B markets in the States. And it definitely wasn't ever our intention to milk that. That was the furthest thing from our minds. We just wanted to honor our brother, so we didn't wanna keep going back to the well with that either. We were gonna do another run and see what happened after that, but COVID hit, so we had to cancel that, and here we are.

"But honestly, man, trying to move forward without Vinnie has been really tough," Brady continued. "Not only do you lose your bandmember, but in that case, Vinnie was one of my best friends, man. He lived in [Las] Vegas more than he lived in Texas. The last four or five years [of his life], he was always in Vegas, and we were always together, man — we were always hanging together. He was one of my dearest friends. So not only do you lose your bandmember and family member, you lose your brother — you lose just everything. And it's been difficult; I'm not gonna say it hasn't.

"Roy Mayorga came in, from STONE SOUR, and played drums on those tours. And he's amazing," Christian added. "I love Roy. He knew Vinnie very well, and there was a lot of mutual respect and love there. So it made sense. All the guys knew him for years. So it was the right guy to bring in and have do the tours. But that being said, it was just still really difficult, because it wasn't our boy. You're used to turning around and looking back and seeing that grin and seeing your boy. And it was just a big part of the band missing because of that, and it's been difficult."

Last December, singer Chad Gray said during a Headbangers Con live virtual panel that HELLYEAH was "in a holding pattern right now [due to the coronavirus pandemic]. I don't have any new music," he admitted. "I've been telling Tom [Maxwell, HELLYEAH guitarist] to get me some riffs so I can write, because right now is a great time to fucking write. So we'll just have to see, man. Obviously, we need to get together and write some music. But, yeah, I mean, hopefully. It's all fucked up right now, nobody knows what's going on with anything."

In September, guitarist Tom Maxwell told the "The Ex-Man" podcast that he wasn't sure there would be a follow-up album to "Welcome Home".