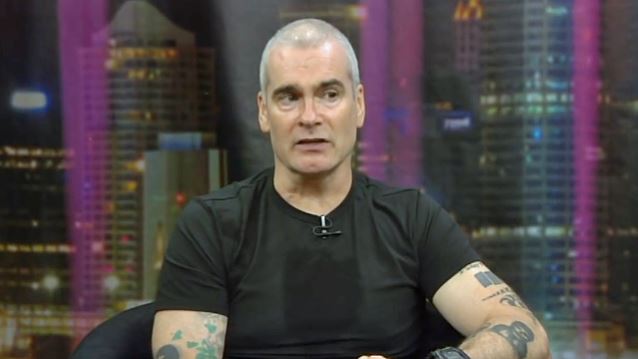 HENRY ROLLINS: DONALD TRUMP 'Went From Grabbing Pussies To Being One'

Punk rock icon Henry Rollins says that Donald Trump "went from grabbing pussies to being one" in the days following his election as the next president of the United States of America.

Rollins, whose outspoken views and activism work have made him one of punk's most political alumni, writes in the latest installment of his weekly column for alternative newspaper LA Weekly: "During the president-elect's acceptance speech, I noticed a difference in his tone and delivery. I don't think it was exhaustion or the adrenaline that was no doubt coursing through his veins after being elected to the country's highest office. Nor do I think it was surprise, even though every poll seemed to have gotten it wrong. I think it had just hit the president-to-be what a massive chunk of meat he had torn off.

"It was as if he had been punched in the solar plexus and rushed to the podium immediately afterward. Rather than elated or confident, he seemed stunned. This is understandable. I don't think he counted on getting this far and am not convinced he really wants the job.

"Donald Trump told his foaming fans at one rally after another that he would 'repeal and replace Obamacare.' He also said that he would build a wall on America's southern border and that Mexico would pay for it. He repeated until he was orange in the face that he would deport or arrest up to 11 million undocumented immigrants via a 'deportation force.' These were some of the 'yuger' arrows in his campaign quiver. Only days after winning the election, 'repeal and replace' was repealed and replaced by an openness to 'amend' the Affordable Care Act. The wall was walked back to fence and 11 million became 3 million.

"Word to Trump supporters: Your hero went from grabbing pussies to being one. Oh, the butthurt."

Rollinspreviously noted that Republicans wouldn't have stood for Trump's "racist and xenophobic" posturing during the Reagan era, and blamed cynicism towards Washington D.C. on the left and right for allowing a such a non-mainstream figure to emerge.

Back in August, Rollins spoke to the New Zealand TV show "Waatea 5th Estate" about what America might look like under President Donald Trump. He said: "I think you would have a country that would have an increasingly difficult time trying to get along with the European Union, such as it is, getting along with China, because we would become confrontational. [That's] not the way to deal with China, in my opinion. They play a longer game, their economy is run differently. They use sometimes confusion logic; there's some great writing about it. If Trump says, 'My way or the highway,' the Chinese will go, 'Okay, we're gonna collect on all that debt. And so we'll take that hotel and that whole skyline, that's ours today.'"

He continued: "I don't wanna get into any tough-guy chest puffing with any country; there's too many kids to get hurt and my country's economy can't sustain it. So if he wants to run a country like a failed businessman or like a corny reality show, I'm not in. And so under a Trump presidency, I think you'd have brown people, black people, Muslim people, gay people having potentially a dangerous or a very awful time in America."