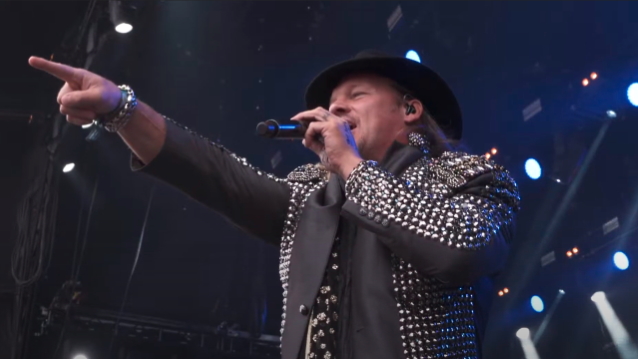 Professionally filmed video footage of FOZZY performing the song "Judas" at last year's Bloodstock Open Air festival, which was held in August 2019 at Catton Park, Derbyshire, United Kingdom, can be seen below.

Two months ago, former SKID ROW frontman Sebastian Bach accused FOZZY's Chris Jericho of using pre-recorded vocal tracks during live performances. On July 16, Jericho challenged Bach to a "singoff" with "no effects, no tuning, no bullshit" in response to Sebastian's allegation. "Bas is a great singer...but I'm better," Chris wrote on Twitter." The wrestler-turned-singer added: "I've never mimed anything ever! I will fucking sing in your face anytime, anyplace dude. I've been a fan & a defender of u since day one...but don't u ever question my rock abilities!" Bach fired back: " You're full of s*** bro. Every clip on the Internet is you miming to a tape. I will sing in your f****** face anytime. Wrestling is not rock and roll. I will show you f****** rock and roll. Check your texts set up The Sing-Off I am ready when you are".