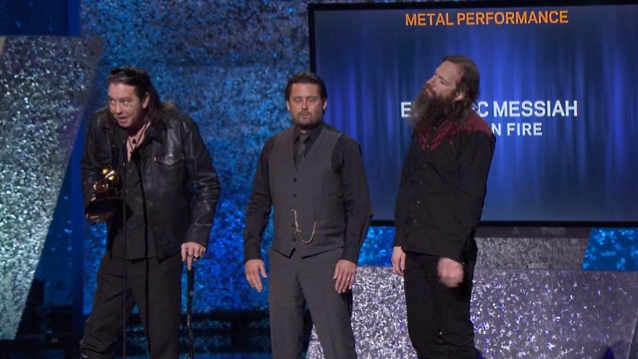 HIGH ON FIRE was honored with a Grammy in the "Best Metal Performance" category in the pre-telecast ceremony at the 61st annual Grammy Awards, which is being held tonight (Sunday, February 10) at Staples Center in Los Angeles. HIGH ON FIRE was nominated for "Electric Messiah", the title track of its 2018 album.

"Wow, what a trip," guitarist/vocalist Matt Pike said in his acceptance speech. "We never really needed an award for doing what we love. Twenty-one years later, we finally got this. Thank you to the Academy."

When HIGH ON FIRE was first nominated, drummer Des Kensel said in a statement: "It doesn't matter whether we win or not. It's just an honor to be recognized for our hard work and sacrifice after devoting our whole lives to music." Bassist Jeff Matz concurred, saying: "This is pretty mind-blowing. We're beyond thrilled about the nomination. We all put a lot of sweat and sleepless nights into writing and recording this album. It's amazing that our efforts are being recognized in this way."

The majority of the awards in the 84 Grammy categories spread across 30 fields are being handed out in a non-televised event, the Premiere Ceremony, this afternoon. The televised portion of the Grammys will begin on CBS at 5:00 p.m. PT/8:00 p.m. ET.

Last year, the Recording Academy announced several changes to the awards process, most notably to the "General Field" categories — record of the year, album of the year, song of the year and best new artist — where the number of nominations was increased from five to eight. The Recording Academy also claims to have made greater efforts this year to diversify its voting body, reaching out to women and people of color specifically about becoming new members while requiring longtime members to re-qualify based on recent work.

The Grammys are voted on by approximately 13,000 Recording Academy members, who are comprised of artists, songwriters, producers and engineers. More than 21,000 recordings were submitted for Grammys consideration this year. For 2019 awards, music must have been released between October 1, 2017 and September 30, 2018 in order to be eligible.