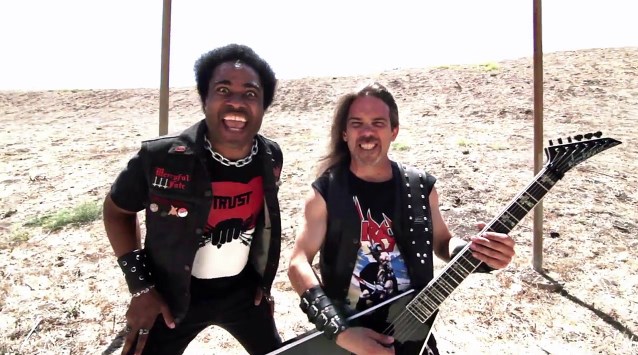 "Hellion Rising", the new video from California thrash metal veterans HIRAX, can be seen below. The song is taken from the band's latest album, "Immortal Legacy", which was released in March 2014 via SPV/Steamhammer. It was made available as a CD, gatefold colored LP and a digital download.

"This is our second video directed and produced by Donovan Vim Crony.

"The scenery is the perfect backdrop for HIRAX's brand of intense thrash metal. No green scenes, fake production or props were used in the making of this high definition video / film.

"The release will coincide with the announcement of our upcoming European tour / concert dates 2015.

"We are very excited to hit the road again and play our music for all the diehard European thrash metal maniacs!"

According to Katon W. De Pena, the reason "Immortal Legacy" sounds so powerful is the fact that the members of HIRAX's current lineup agree 100 percent on the group's stylistic direction.

"Lance [Harrison, guitar] is a riff-writing master and a major force to reckon with," says Katon. "Nicknamed the Shred Baron for obvious reasons. He believes in heavy metal 100 percent." His younger brother Steve (bass) is an important part of the HIRAX sound. "Nobody plays bass like him," says Katon. "There is a unique sound and bond between Steve and his brother. As a bass player, he is a true musician."

Last but not least, there's Jorge Iacobellis (drums and percussions),who was born in Buenos Aires, Argentina. Iacobellis is a seasoned veteran who plays with lots of heart and soul. Katon says: "The best way I can describe his drumming style is loud and powerful."

"Immortal Legacy" was produced by Bill Metoyer (SLAYER, ARMORED SAINT, W.A.S.P., SACRED REICH) who previously worked with HIRAX in the early 1980s on their first two albums. Metoyer is a master of his craft and HIRAX feel honored and lucky to have him working with them. For Katon, Bill is a "musical wizard and his work on our new album is genius."

The cover of "Immortal Legacy" was created by legendary artist Philip Lawvere (KREATOR, CELTIC FROST),marking his first oil painting in 25 years since coming out of retirement. He is the artist behind such classic album covers as KREATOR's "Pleasure To Kill" and CELTIC FROST's "Emperor's Return". Lawvere had done stunning illustrations for numerous albums and is best known for a slew of thrash metal offerings released on Noise Records. The HIRAX frontman comments: "We couldn't be happier to have Philip Lawvere illustrating the cover of our new album. After getting Bill Metoyer to produce it, this is truly the icing on the thrash metal cake!"

"This is our most epic-sounding record to date, sonically powerful and over the top," he says. "14 new raging thrash metal songs that will make you bang your head!!!"

He adds: "This is probably our most diverse album ever. I think there is something for every heavy metal fan on this record! Obviously I'm very proud of it."