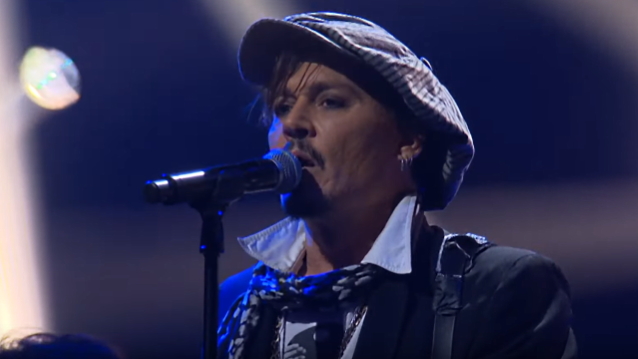 HOLLYWOOD VAMPIRES were the musical guests on last night's (Tuesday, July 30) episode of "The Late Late Show With James Corden". The band performed its cover of David Bowie's "Heroes". The studio version of the track, featuring Johnny Depp on lead vocals, was recorded last year at legendary Hansa Studios — the same place where Bowie wrote the original back in 1977.

The band's second album, "Rise", was released on June 21 on earMUSIC as a CD digipak, 2LP+download and digital. The disc was produced by Tommy Henriksen and the HOLLYWOOD VAMPIRES.

Unlike HOLLYWOOD VAMPIRES' 2015 debut record, "Rise" consists mainly of original material, written by the band. There are however, in the spirit of the VAMPIRES' original mission, three covers of songs originally written and recorded by some fellow rockers who died far too young: an intimate and intense version of "Heroes"; the JIM CARROLL BAND's "People Who Died" and Johnny Thunders's "You Can't Put Your Arms Around A Memory", sung by Perry.