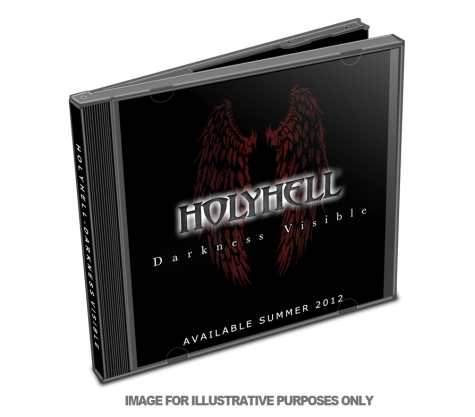 Behind-the-scenes footage from the photo shoot for HOLYHELL's new album, "Darkness Visible", can be seen below.

"Darkness Visible" will first be made available worldwide on June 16 exclusively on iTunes and on the band's own online store, The Kingdom Of Steel.

As a special "thank you" to their most loyal fans, HOLYHELL is offering a special pre-sale bundle, featuring the physical CD, which will be released in the store on July 27, and the digital album, which will be delivered on June 16.

As a special treat, the first 100 fans ordering this bundle will receive their CD autographed by HOLYHELL.

"Our fans have been amazing all these years. The pre-sale bundle is our 'thank you' for their incredible support", said HOLYHELL singer/lyricist Maria Breon.

"We've been pushing ourselves to the limit, we've given all our heart and soul, and we believe our fans will hear and feel it in every single song", added keyboardist/composer Francisco Palomo.

"Darkness Visible" is the band's sophomore follow-up to their debut record "HolyHell". It is described in a press release as "a fascinating blend of songs, showcasing the band's power lineup. [The CD] invites the listener on an unpredictable journey into their own soul. The record is heavy and hard-hitting with a melodic play between darkness and light. It is pure and it is powerful!"