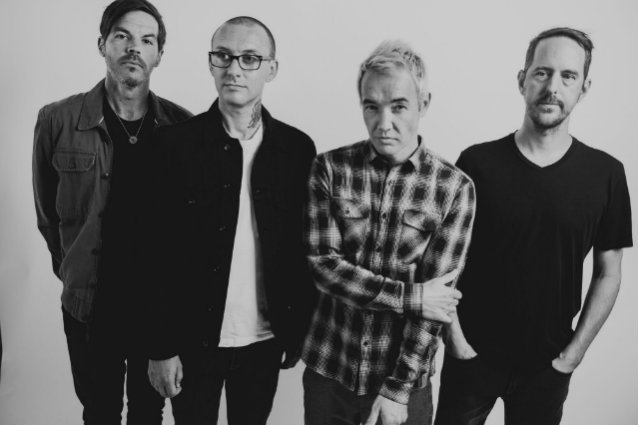 HOOBASTANK has inked a deal with the Austrian indie label Napalm Records. The band's new album is scheduled for release in the first half of 2018.

HOOBASTANK comments: "We're extremely thrilled about signing with Napalm Records and honored to be joining their roster of talented artists.

"For our sixth full-length album, we finally got to work with producer Matt Wallace (FAITH NO MORE, MAROON 5). We had been wanting to work with him for years and finally the timing was right.

"The writing and recording process was everything we could have hoped for. Matt challenged us and brought out different aspects of what we love about making music.

"We're excited for our fans to hear it and to make some new fans along the way. "

Napalm CEO Thomas Caser also commented on the latest addition to the label's artist roster: "We are delighted to work with this iconic rock act and are looking forward to the band's new album which is scheduled for 2018!"

In 1994, HOOBASTANK was founded in Agoura Hills, California. In 2001, HOOBASTANK attracted the interest of global player Island Records, which at that time was the home of acts such as NINE INCH NAILS, THE CRANBERRIES, PJ Harvey, PULP and Tom Waits, to name a few. HOOBASTANK released its debut album that same year.

The music of these California youngsters worked really well during this time of fun sports, high-profile video games, and blockbuster movies. Being featured in the "Aggressive Inline" video game, the inline skate counterpart to "Tony Hawk's Pro Skater Series", and contributing to the soundtrack of the motion picture "Daredevil" helped propel HOOBASTANK's career to a new level. Also, the release of their world-famous song "The Reason" from the self-titled album ended up being played in the final episode of the cult TV show "Friends" which helped gain much fan recognition. The song stayed at No. 1 for 21 weeks on the Canadian single charts, which broke a new record back then, and made it to No. 2 on the U.S. Billboard Hot 100. The album would reach No. 3 on the Billboard 200 charts and hit Top 10 of many other countries' charts as well.

To this day, HOOBASTANK has sold more than ten million albums worldwide, with over five hundred thousand subscribers to its YouTube channel, almost two million followers on Facebook, fifty thousand followers on Twitter and nearing that on Instagram, it's safe to say that HOOBASTANK is one of the true American rock acts of our time.

HOOBASTANK has stayed active in the game, continuing to release successful albums. They have been featured in motion picture soundtracks and even contributed to Music For Relief in support of the Haiti earthquake crisis in 2010. Coming on board with Napalm will start the next chapter in the band's career.