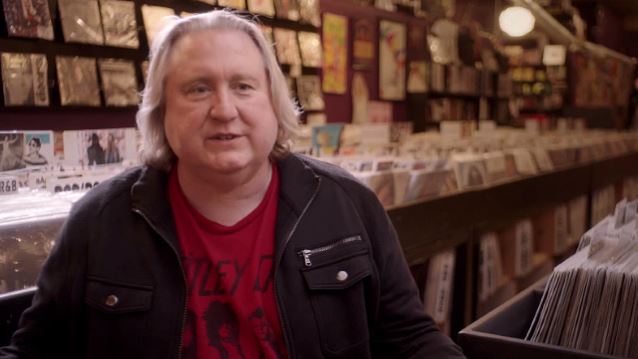 Episode 2 of Uproxx's GUNS N' ROSES documentary series tells the story of how Tom Zutaut, former Geffen A&R executive who was responsible for signing GN'R to the label, saved "Appetite For Destruction" from an early death. After seven months of touring, the album had only sold 200,000 units, and Geffen wanted to pull the plug on the project. Tom decided to risk his career on a power move that got the band on MTV and changed the course of rock and roll history. One video play at 4 a.m. was all it took. According to Zutaut, MTV received 10,000 calls when the video aired. The overload melted MTV's switchboard, and almost immediately, GUNS N' ROSES' career skyrocketed.

In a 2005 letter to the New York Times, Zutaut stated about GUNS N' ROSES singer Axl Rose: "Axl Rose was one of the only artists I ever worked with who was never motivated by money. He consistently put the quality of his artistic output above all. Whether you consider him to be a musical genius on hold, a poster child for the misunderstood, or a narcissist, all of his actions are motivated by a pure desire to make every recording count as a true reflection of his own high standards."

He continued: "In a sea of musical mediocrity and generic voices processed into greatness by computers, Axl Rose achieved the American dream in music without compromising his integrity for the sake of fame or fortune. I am sure that Axl's new GUNS N' ROSES will impact popular culture with the same vigor and vitality that made 'Appetite For Destruction' a part of musical history."