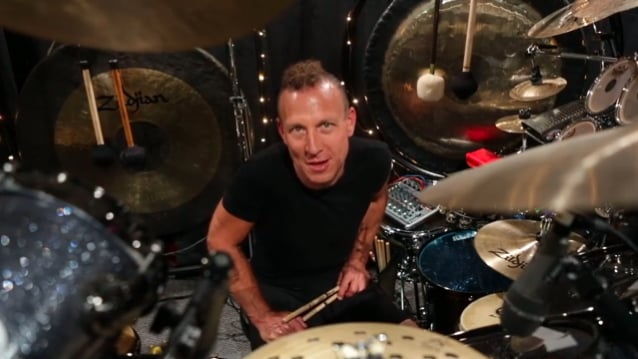 Bionic Buzz spoke to JANE'S ADDICTION and PORNO FOR PYROS drummer Stephen Perkins about how he ended up playing additional percussion on the song "Know Your Enemy" from RAGE AGAINST THE MACHINE's classic self-titled debut album in 1992. He said: "Tom Morello [RAGE AGAINST THE MACHINE guitarist] had a band called LOCK UP that would open up for JANE'S ADDICTION in, like, '88 [or] '89. And then we started jamming quite a bit in our home studio just to get our ya-ya's out. And RAGE's first big show was opening up for PORNO FOR PYROS in a place called Castaic Lake here in L.A. We didn't do a venue. We rented out a big stage and brought it to a lake and had a party. So me and Perry [Farrell, JANE'S ADDICTION singer] knew about Tom through all the other bands and other sessions he's done, and then we heard he had a new band called RAGE. We went to see them at the Lingerie, which is a hundred people, and they put on a show that you would see for a hundred thousand people. And we were, like, 'It'd be great to have you guys on board.' So the friendship is many years prior to RAGE.

"L.A.'s got a small circle of musicians," Stephen explained. "There's a lot of us, but the deep pool is getting more shallow with great musicians. There's many players, but not that many great ones. So when you're really a great player, like Tom, you resurface and you get to know everybody. Like Flea [RED HOT CHILI PEPPERS], like the cats in NO DOUBT — you end up seeing 'em over and over in different places and appreciating what they do and becoming friends. Even though we all have different camps — basically, it's the same camp; we just have different tents. We're all camping out together, but we all have our own little separate tents. And then we call each other, 'Hey, can I borrow your drummer?' 'Can I check out your bass player?' Flea helped out JANE'S ADDICTION and PORNO FOR PYROS. I helped whoever needs it. It's not really help, but it's just like if I can lend a hand shaking something or banging something, I love to be a part of it."

Perkins recently teamed up with steelpan players from eight different countries to record a quarantine cover version of THE WHO classic "Baba O'Riley".