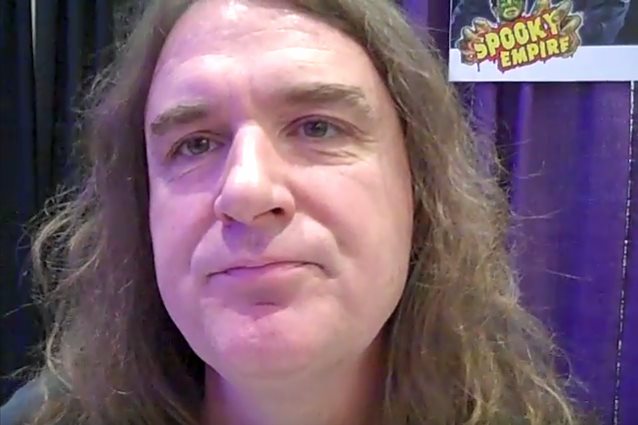 Steven Lebowitz of AXS.com conducted an interview with MEGADETH bassist David Ellefson at the Spooky Empire horror convention, which was held December 2-4. 2016 in Orlando, Florida. You can now watch the chat below.

Speaking about his involvement with Shepherd Of The Desert Lutheran Church in his hometown of Scottsdale, Arizona, where he started a contemporary worship service — think Old Testament lyrics — used as a springboard for praise and worship songs soft rock songs, Ellefson said: "I grew up in a Lutheran church as a kid. I grew up on a farm in Minnesota, so going to church on Sunday is just what we did; nothing real fanatical — [it was] just part of our life. And we were in Nashville making a MEGADETH record — the 'Risk' album — and my kids were real young, so my wife and I started taking them to church. You kind of do what your parents do, when you become a parent. And I called home to my wife, and she said, 'Yeah, the worship leader asked if you're around next week, if you finish your bass tracks on the album, if you're gonna be home, maybe you can play. The church needs a bass player.' So I thought, 'Yeah, why not?' It's off the radar, and it'd be kind of fun to play different music. And so I did, and I really enjoyed it; it was cool. You know, modern worship music is kind of this U2-ish kind of music, which I like anyway. And that's how it started. And then after that, I just kept getting invited back, and I guess the good Lord probably thought, 'You know, if I get David to bring his bass, he'll probably show up and go to church more often.' So I just enjoyed it. And I got networked in with a bunch of really, kind of, top-line worship musicians. And it's funny — they all grew up on MEGADETH, METALLICA records, and they're fans of ours, so it's kind of funny how that community really admires and respects what we do, and, of course, bringing my family to church, I admire and respect what they do. So it's kind of a fun little community."

Asked if there is any other genre of music that he would like to explore one day, Ellefson said: "You know, it's funny. Frank Bello from ANTHRAX and I, we have a group called ALTITUDES & ATTITUDE. It was formed when he and I were doing some bass clinics together a few years back when we were doing the 'Big Four' shows. And we started writing, mostly just to have some backing tracks for our clinics. And what happened is Frank brought in a couple of songs, I brought in a couple of songs, and we had this really cool synergy. And this music is more… again, it's kind of FOO FIGHTERS meets THE CLASH meets U2 — very kind of almost folksy, singer-songwriter kind of stuff. And it's electric, but it doesn't have a thrash bombast to it. And so we actually just finished an album just last week out in L.A., and we're looking at a time to release it. MEGADETH and ANTHRAX are in similar album cycles and tour cycles, so I think once we wind down next year in 2017, we're gonna look at a time when we can put that out and then he and I can go out and do some playing around it. And it's fun, 'cause we're not being solo artists — we're in our bands — but it's a fun thing that we can do that's very different from what our audiences hear us do inside of our main groups. We put out an EP about three years ago — just three songs — and just kind of fired it off, and fans loved it. It's something really different. And I think because we're already in two of the greatest thrash bands out there, why play more thrash? We do that really well inside of our bands, so Frank and I get to have a fun moment away from that that our fans can appreciate."

The band is continuing to tour in support of its latest album, "Dystopia", which came out in January 2016.