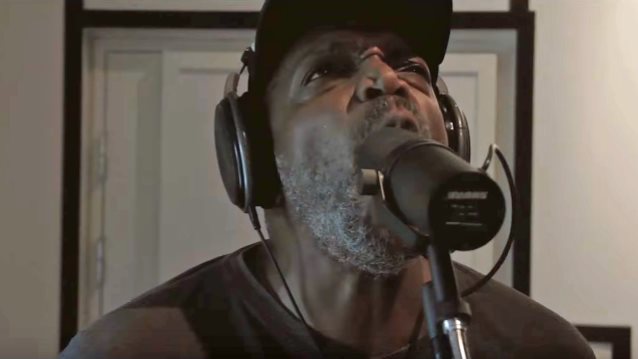 SEPULTURA Frontman On Modern Recording Technology: 'I Miss The Sound Of Analog'

DJ Blaze of the "Get Heavy Metal" radio show on Cambridge 105 FM recently conducted an interview with vocalist Derrick Green of Brazilian/American metallers SEPULTURA. You can now listen to the chat in the YouTube clip below.

Speaking about the wide acceptance of Pro Tools recording software, with the vast majority of music being recorded digitally onto computer hard drives, Derrick said: "I think the sound of analog is something that… maybe not the average person can hear the difference. But, as an artist, sound is everything, and for me, I miss the sound of analog. I just think it's more practical to use Pro Tools; it's just a lot faster to do recording and to track things at a pace where… You can try things over and over, or you can do things you've never done before and not have to worry the price for every [day you are in the studio]. It's very expensive to work with analog as well."

He continued: "I think in the digital times now, you are able to hear a lot of different artists, because you're able to do things in your own home that you weren't able to do before. So I think this is pretty cool — the fact that you're able to hear a lot of new music and new sounds coming from people that may not have the means to do it, but they can do these things without having to have a studio with tape and everything. It's great that there's this technology that you're able to do this at home. So it's a big difference time-wise, money-wise and sound-wise. I think it suffers a little bit, because, digitally, I think it's always hard to capture that, that analog sound — which is impossible, I think, at some point. But you have the good and the bad; there's the two sides that exist."

Derrick recently told Metalholic about SEPULTURA's decision to work with Bogren this time around: "I visited Sweden a few years back and I was really impressed by the sounds that I was hearing come from out of Sweden, really, like the producers, and the bands that were picking these producers. There was something about the certain sound that I was hearing coming from Sweden. I started asking a lot of people questions, a lot of friends from Sweden, like 'What's going on? Who are some producers?' I thought it would be great for SEPULTURA to do something here, completely out of our element and to shoot for something totally different with this album. There's a Brazilian band that worked with Jens before and Jens had worked with many different artists all over, but this was definitely the connection that got us closer to Jens. Once we met and we started sending him demos and everything, it just connected well. Everything started to flow. Jens is a great producer because he's very meticulous. The stuff that he worked on really had an inspiration on us as far as pushing for something different for us."