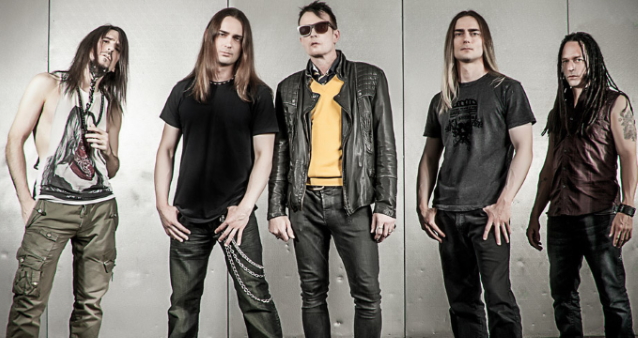 In July 2015, Vice Inc., whose chief executive officer and principal executive officer are ART OF ANARCHY guitarist Jonathan Votta and drummer Vincent Votta, sued ex-STONE TEMPLE PILOTS frontman Scott Weiland, alleging that he refused to help promote ART OF ANARCHY's debut album and take part in music videos after agreeing to write and perform the lyrics for 10 songs for the disc. According to The Blast, Vice said that it paid Weiland $230,000 upfront for his work.

Ex-GUNS N' ROSES guitarist Ron "Bumblefoot" Thal, who played on ART OF ANARCHY's debut LP, as well as a follow-up effort, discussed the breakdown of Weiland's relationship with the other members of ART OF ANARCHY during a recent appearance on "Waste Some Time With Jason Green".

He said (as transcribed by BLABBERMOUTH.NET): "It started off, the two brothers in the band, Jon and Vince — sweetest guys in the world, and the most honest; they're just totally legit. They wanted to make their dream album — just them. So they came into my studio. They had 10 songs that they wrote music for. And the idea was to get different singers to sing on each song. So they were recording, and I was recording them here [in my studio]. And I started laying also some guitar solos. So then it was the three of us doing it. Then we started looking for singers. And they reached out to Scott Weiland. I reached out to some people. And Scott was the first one to say yes. So he sang the song ''Til The Dust Is Gone'. And it was fantastic; he did such a great job.

"[Scott] was the kind of guy that, whatever you can imagine for a song, he would come up with something that you never would have thought of," he continued. "It was just, like, 'Why didn't I think of that?' It was such a different approach. He had his own approach, and that's what made him great.

"So, after he laid that one song, his manager and lawyer told Jon and Vince, 'Why don't we make this a band? Let's make this a band.' It came from his camp. They said, 'We wanna make this a band. He'll do the whole album. And we're gonna help you get a record deal and support this thing.' So the guys were, like, 'Sounds good to me. Sure.' So it was the four of us. And we had an agreement. A big rock-solid… It says in big letters at the top: 'Bandmember Agreement.' And how we were equally splitting things and publishing and this and that, and all the things that a band agreement has. And he signed it. And we all signed it. And then we started looking for bass players, and we got the wonderful John Moyer [from DISTURBED]; he joined. So now, there it is — we're a band. John had a friend who is a manager and suggested that he manage the band. And the manager said, 'Well, let's try to get a record deal,' 'cause at this point, we were tossed between, do we get a record deal or do we do it ourselves, put it out ourselves? And our manager started actually working towards getting a record deal. And then, when it was time to move forward everything and release it, that's when Scott Weiland said, 'I'm not in the band.' And it was, like, 'Well, for the past year, we were led to believe you were, and we had a signed thing. We did an album together.' It was a real shock. Then we had talked on the phone. He and I spoke for a half hour, and he was such a nice guy. I liked him; I did. I wanted things to work out; I didn't want there to be problems. I wanted to really find a way for it to work out. He was working on the 'Blaster' album, his solo album."

Thal continued: "We delayed the album for a year — the ART OF ANARCHY album — so that he would have time to do his, and to get all his going. And then we reached a point where we had to move forward one way or another — either renegotiate what was in that agreement or see it through; one or the other. And it was reaching a boiling point. And then he did agree to move forward with it, and we signed sort of a new agreement. And that agreement was still a bandmember agreement; it just said things like we're not gonna sue him [laughs], and things about [how] he's gonna support the album [and] we're gonna make videos and this. And the royalty is the same; we're still bandmembers. It's still a bandmember agreement; we're still bandmembers. None of that changed. It really wasn't much different. So then we did two videos and a photo shoot. And we were in negotiations with our record label for everything. And then it was time to announce that the band existed. So we were all in contact the night before. I was, like, 'This is my Twitter blurb that I'm gonna say.' And he said, 'Let's use the other logo instead of this logo on top of the YouTube,' and, 'Let's do two songs istead of four.' He seemed like he did care. Like, he told me which song that he really hoped would have been the first single. And the bio was approved, and everything was good to go. So the next day, we announced. This was January 2015, I think. It was early 2015, and we announced. And that's when, to our surprise, a few hours later, he put out a statement saying that, 'good luck in finding a new singer,' basically.

"I did not want him having trouble," Ron added. "So I went up to Rolling Stone and tried to diffuse the situation, and just said, 'Oh, yeah, he's got 'Blaster' coming out. I have my 'Little Brother Is Watching' album coming out. Moyer [has] a new DISTURBED album coming out. We're supposed to be putting out lots of music and be prolific; we're musicians. And everybody's supportive of what everybody's doing. And besides all that, we did this together.' I just tried to minimize any [negativity].

"I didn't speak directly to [Weiland] at that point; contact stopped. And the thing is he kept saying things in the media, and he accused Jon and Vince of scamming him. He said it was a scam from the beginning, was one headline. And at that point, our lawyer reached out and said, 'Was this a mistake? Were you misquoted?' Like, trying to not accuse, but give him a chance to fix it. And we didn't get a response. And it turned legal. So now, everyone's suing everyone and all that shit. And then he passed away.

"Even though I've spent barely two days with the guy, and a phone call, but still, just making an album together and everything that transpired, the ups and downs of it all, you feel like the person is still a part of your life, and it was devastating [when he died].

"So we spoke with the label, and we decided to make the album free. And my first suggestion was that we donate all proceeds from that album to drug programs and things that can maybe help someone else before they get to that point. But, ultimately, the decision was made to make the album for free. It was the final music that he put out, and we put it out for free."

Asked if the legal battle between Weiland and Vice got resolved after the singer's death, Ron said: "We reached out to his estate and said, 'Look, we're, of course, not gonna sue you. If anything, can we at least just collect his share of royalties,' because we did give him a big chunk of money as an upfront advance. And the guys were out that money, plus legal fees, and the name trashed. And it took a long time to get that settled. And it did."

In March 2017, ART OF ANARCHY issued its sophomore album, "The Madness", featuring Scott Stapp on vocals. Less than a year later, the founders of ART OF ANARCHY sued Stapp for allegedly refusing to tour with the band and participate in promotional photo and video shoots and publicity events. That $1.2-million lawsuit was filed in New York State Supreme Court by Vice, which claimed to have paid the CREED singer $200,000 for services to be rendered, which he asked to be treated as a loan, for tax purposes.

Stapp only performed at 18 concerts with ART OF ANARCHY in 2017 and was unwilling to appear at a scheduled video shoot in October 2017 on the deck of the Intrepid Sea, Air & Space Museum on the Hudson River in Manhattan.

"Despite Vice's repeated and specific directions to Stapp, and Vice's entreaties for his cooperation, Stapp repeatedly and continually shirked his contractual obligations," the complaint stated.

Stapp's failure to live up to his contract led to the cancelation of the group's recording contract at the end of October 2017, the complaint alleged.

"If Stapp had dedicated himself to ART OF ANARCHY with the same fervor that he dedicated to his solo career, ART OF ANARCHY would have had a successful concert tour and its record contract would not have been terminated," the complaint stated.