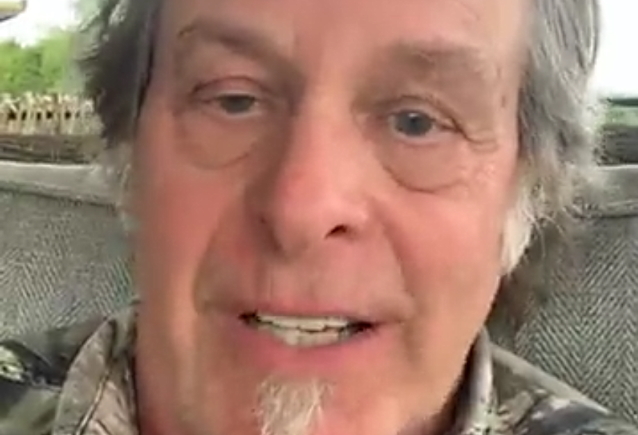 Ted Nugent has once again denied the benefit of wearing masks and questioned the efficacy of vaccines while also repeating false claims about voter fraud in last year's presidential election.

The outspoken conservative rocker made his latest comments in a Facebook Live stream on Friday (April 2). While praising the exuberance and enthusiasm of his loyal fans and supporters, Ted said (as transcribed by BLABBERMOUTH.NET): "Isn't piss and vinegar essential for an American Dream? Huh? Critical thinking? Suspicion of elected employees who violate their oath in the Constitution. And probably unprecedented suspicion of a society that thinks that Joe Biden won the presidency. And that Joe Biden qualifies to be the leader of anything.

"Would you let Joe Biden shovel the shit in your dog kennel?" he asked rhetorically. "Because I wouldn't. If that's offensive, then what is he doing? I am incapable of the offensiveness of our government right now. I don't have that depth of evil and dishonesty. So there's nothing I say that can be anywhere near as offensive as to what they're doing every day. Abandoning and destroying the American culture of we the people, pursuit of excellence. Open borders. Giving benefits to invaders, but not our vets. Pure evil. Allowing invaders to come in by the millions but not allowing schools to open. Burning tax dollars for scam deals to benefit the financial orgy of his donators. The destruction of small businesses that is the backbone of America. The mask. Really? The mask. And the mask contains your breath when and how? A vaccine that was authorized in four months compared to every other vaccine that took years of adequate testing. Have you seen what's in it?"

So far, 96 million Americans — nearly 30% — have received at least one dose of the three vaccines, according to the Centers for Disease Control and Prevention.

A Pew Research Center survey in late February found that 69% of Americans either have already been vaccinated or plan to be vaccinated.