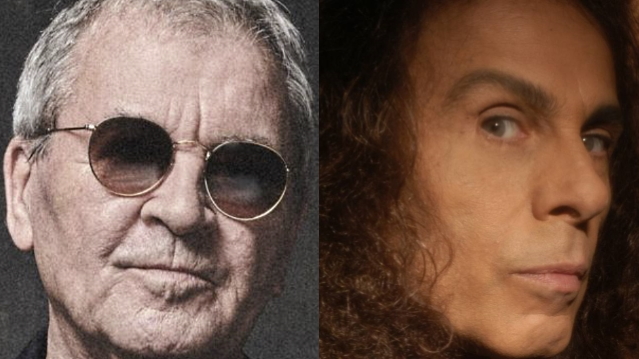 IAN GILLAN On RONNIE JAMES DIO: 'We Were Very Close'

In a recent interview with Vikram Chandrasekar of Tales From The Road, DEEP PURPLE singer Ian Gillan was asked if he was good friends with legendary heavy metal frontman Ronnie James Dio. "Yeah, we were close. We were very close," he said (as transcribed by BLABBERMOUTH.NET). "It was Ronnie Dio, Klaus Meine [SCORPIONS] and myself; we were on a tour together. And, of course, as you probably know, Klaus and Ronnie are diminutive figures — they're not very tall — and I'm just over six foot. And so we had a photograph taken together with me in the middle and the two little ones on either side of me. And it was hilarious. And we got the picture pinned up in the dressing room, and it was called 'the three fivers' as opposed to 'the three tenners.' It's an English joke.

"When I was buying some socks in Munich airport, [Ronnie and I] were on the same charter plane together, and Ronnie was opening for DEEP PURPLE, I think. And I was in the shop going, 'I've gotta buy some socks.' And they had packs of three pairs of socks hanging on the rack. So I was just looking through them, seeing which ones I want. And Ronnie's head appeared through the socks, and he said, 'Ah, socks, drugs and rock and roll.' [Laughs]

"Yeah, we were lovely mates," Gillan added. "We were good mates."

Dio's long-awaited autobiography, titled "Rainbow In The Dark: The Autobiography", was released in July via Permuted Press. It was written with longtime friend of 30 years and esteemed music writer Mick Wall, who took up the mantle after Ronnie's passing.