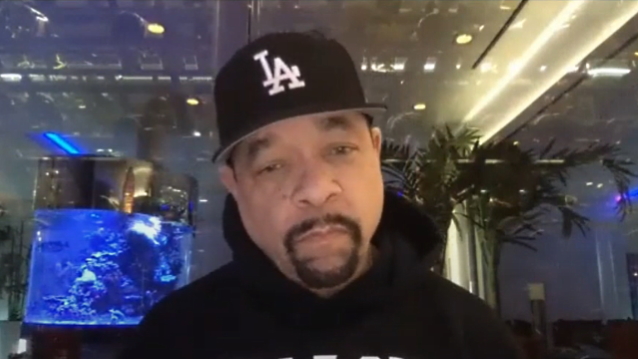 BODY COUNT frontman and legendary rapper Ice-T has told Darren Paltrowitz, host of the "Paltrocast With Darren Paltrowitz", that working with SLAYER on the soundtrack to "Judgment Night", a 1993 action-thriller starring Emilio Estevez, Cuba Gooding Jr., Jeremy Piven, Denis Leary and Stephen Dorff, was a "career highlight" for him. "That was the big moment for me," he said. "Later on, we actually covered SLAYER, for 'Raining Blood', but just to be connected to one of the groups that inspired BODY COUNT's sound… BODY COUNT is a mash-up of SLAYER, SUICIDAL [TENDENCIES] and BLACK SABBATH, so that was… It validated me. If you're gonna go out and you're gonna base your music off of a group and that group thinks you suck, it doesn't work."

Ice-T collaborated with SLAYER on a medley of three THE EXPLOITED songs for "Judgment Night", which was arguably the first time that rock and hip-hop artists worked together on a full-length album.

A few years ago, SLAYER bassist/vocalist Tom Araya told Please Kill Me that he and his bandmates had a great time working with Ice-T on the "Judgment Night" soundtrack.

"When we were asked to do the soundtrack for 'Judgment Night', we were told that they were going to match up each band with a rap artist and that we would be matched up with Ice-T," he recalled. "When we found out, we were like ‘yeah we’ll do that!’ So we started thinking and working on an arrangement, we came up with doing punk medley of THE EXPLOITED. The L.A. riots, all the civil unrest going on at the time and title of the movie itself was why we went that route.”

He continued: "So we got together with Ice-T in the studio. We talked about the songs and he was cool with it, so we started working on rewriting the lyrics actually updating the lyrics to fit the times… That was an awesome experience collaborating with Mr. Ice-T."

Asked if he knew that SLAYER's contribution, and that the overall soundtrack, would be so influential in the long term, "Araya said: "When we recorded the song, when we record anything, a cover or songs that we write, I don't think about the lasting impact. It's not something that I ever really gave thought about. The only thought is 'are they going to like the song?'"

He added: "I am surprised that it's had a lasting impact. [It] definitely was a really cool experience for me."