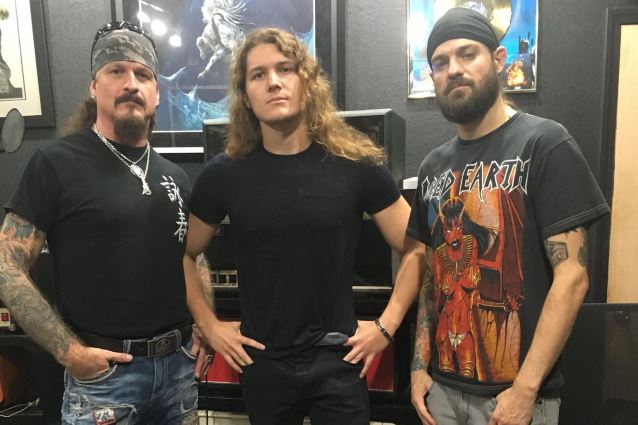 ICED EARTH has announced the addition of guitarist Jake Dreyer (WITHERFALL, WHITE WIZZARD, KOBRA AND THE LOTUS) to the group's ranks. He joins the band as the replacement for Troy Seele, who announced his departure from ICED EARTH in August due to family responsibilities.

ICED EARTH guitarist/founder Jon Schaffer said in a statement: "We're excited for Jake to be a part of the team as he has the talent, drive, and the personality we were looking for.

"Jake joined Stu [Block, vocals] and I last week to do some tracking at Independence Hall and he hammered out some ripping guitar solos on several songs from the new album.

"Jake will play on the upcoming ICED EARTH studio album and will perform his first live show with us in November at Hammerfest in Germany.

"I want to personally thank all of the guitarists who auditioned for the position. It was an overwhelming response, and there are many very talented guys out there. So again, thank you for your passion and interest.

"We are progressing at an excellent rate on the new record and I can say with all sincerity that this will be one of the most significant albums in the ICED EARTH catalog. We are pumped. It's the next level."

Jake began taking lessons at the tender age of eight years old and formed his first band, STEALTH, at the age of 11. By the time he was 13, he had professionally recorded his first album and opened up for Lou Gramm of FOREIGNER and John Waite of THE BABYS.

ICED EARTH will headline the "MTV Headbangers Ball" European tour in December. Support on the trek will come from ENSIFERUM, KATAKLYSM and UNEARTH.

Fans can expect the next ICED EARTH album, tentatively titled "The Judas Goat", to be released in 2017.