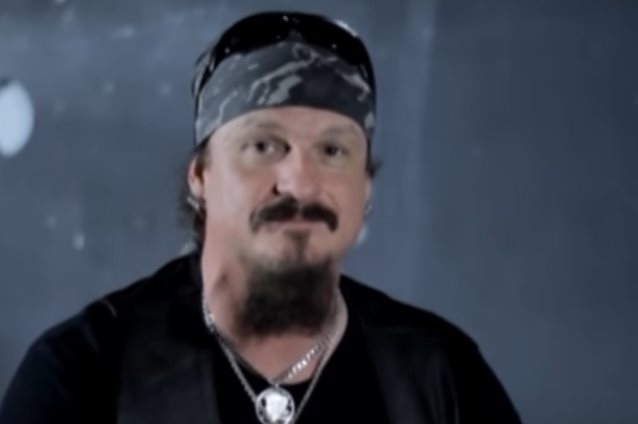 ICED EARTH guitarist Jon Schaffer has weighed in on underdog Donald Trump's stunning upset of Hillary Clinton in the U.S. presidential election, saying that while he doesn't fully trust the real estate mogul, he is "cautiously optimistic about where things are going."

Speaking to Greece's "TV War", Schaffer — who has previously described himself as "a constitutional conservative" — said about the election outcome (see video below): "I'm a freedom guy, man, and unfortunately, politics tend to make us less free all the time. So I'm probably more of an anarchist in the sense that that means ultimate freedom, actually. It doesn't mean chaos in the streets and destroying people's property; that's what they tell you, but that's not what it is.

"I think it's interesting what's happening around the world. There's a lot of populist movements going on. It gives me hope. I feel like… I mean, I'm done with federal elections until I see that there's some proof of restoration of the republic of the United States, which is not — it's a criminal enterprise and has been; it's been doing horrible things around the world.

"I think the American people spoke volumes against the rigged system, against a system where they did try to steal the election. That's come out. At least five states were stolen. They had three million illegal immigrants vote. So the popular vote, I don't believe that Hillary won that, even though they say she did. I think there's so much lies and so much deception coming out of the mainstream media and the government itself that I don't trust any of it."

He continued: "Does that mean that I trust Trump? No, it doesn't. I am hopeful, only because I see the people waking up. That's the thing. Because these conspiracies that are true — and they are not theories; they are facts, conspiracy facts — can only work if it's in the shadows, and it's being exposed. And thank God for the Internet, 'cause otherwise it wouldn't. And that's where my hope lies — that you have the middle class, the people that are just trying to live and pay bills and take care of their families are now saying, 'Hey, fuck you! I'm tired of this.' And so, they're waking up, and that's a hopeful sign.

"I'm cautiously optimistic about where things are going. That doesn't mean that I have all this faith in Trump. I just feel like we know the system… And I'm not talking about Republicans versus Democrats — it's not that — because both parties are controlled by Wall Street bankers that are criminal as fuck. So the thing that's interesting about Trump is he paid for [his presidential campaign] himself. So Goldman Sachs doesn't own him. You know, that's cool. But does that mean he's a great human being and really wants to do the right thing? Time's gonna tell on that; I can't say that yet. And even then, it's not a dictatorship. One guy can't fix it. It's gotta be a complete movement of the people to take the criminals out of Congress too. I mean, there's so much corruption in Washington, D.C. that it's a major fucking job to go in and clean that place up; I mean, it's a big deal. So I'm cautiously optimistic that things are going to get better — I hope — but I can't say that 'he's gonna do it.' You know, it's stupid. I mean, you'd have to be a braindead robot to think that. This is a… It's a very complex situation. I feel pretty confident that at least World War III is paused, because I was really concerned about that, and for a good reason."

Asked if he thinks Hillary "would push the button" if she became president, Schaffer said: "I think her handlers would. I mean, she's a puppet. You know what I mean? All of them — Obama, Clinton, the Bushes — they're all puppets to the shadow government, and I don't think Trump is, actually. If he is, then this is the most elaborate political theater I've ever seen in my life. And I don't think so, because the Republicans hate him, the Democrats hate him, the media hates him, so I'm, like, 'I'm interested.' [Laughs] I'm, like, 'Wait a minute! If all of these fuckheads hate this guy, then maybe he's okay.' You know what I mean? So that's why I'm saying I'm cautiously optimistic. But even then, like I said, it's one person. And there's some of the people now that he's surrounding himself with that I don't trust at all, that are establishment Republicans. And then I think, I've been studying history my whole life. Some leaders are very smart, and they say, 'Keep your friends close and your enemies closer.' So, I mean, this is game — it's a dangerous game a lot of times, but it is a game. I hope his intentions are good for the United States and for the world, because I think we need prosperity and we need peace, and that only comes from freedom — it doesn't come from more government. I don't care if it's a communist or a fascist government, they both suck. They're both there for the elite to serve their purposes for the elite and to destroy the middle class, and that's it. So we've gotta get out of this left-right paradigm, as if there's only two choices. The other choice is freedom. If we actually had a free market… Unfortunately, what they call capitalism, it isn't free-market capitalism, it's corporatism. So if we actually had a free-market system, then the markets would decide who stays in business and who doesn't — not fascism at the highest levels of government. Then it only favors the big corporations and they destroy the small business, and blah blah blah. It goes on and on."

Schaffer went on to say: "For me, it's a very exciting time to be alive. I was really nervous about a war with Russia. We don't need that. Who wants that?

"I think the people in the world would all get along a lot better if we didn't have government. I mean, the governments are the ones that create all the division and the fighting.

"I've been all over the world, man, a bunch of times. We've been to Tunisia… Muslims all over the place. A lot of great people. You know what I mean? Are there radical people in every religion? Of course there are. But to demonize an entire religion because of it is wrong. And we've been to China, we've been to Russia, we've been all over the world, and we've met people that all just wanna be left alone and want freedom. And that's what the United States used to stand for. It's never been perfect, that's for sure, but it was the thing that made people want to be American and look up to America and go there. And now it's just… It's horrible what's happened, and it's been going on for a long time, but it's become obvious lately, especially since 9/11. And that's why I hope that the people can take our country back, and then I think ultimately that's gonna be good for the world. But I don't know. All we can do, as people that are awake, is discuss the facts and try to get other people to wake up, because the only way this shit works is if you have blinders on. If everybody sees it, it's game over. It's that simple."

ICED EARTH will enter the studio in January to begin recording its new album, "Incorruptible" (formerly "The Judas Goat") for a tentative May 2017 release. Songtitles set to appear on the CD include "Trail Of Tears", "Clear The Way", "Black Flag", "The Great Heathen Army", "Raven Wing" and "Seven-Headed Whore".