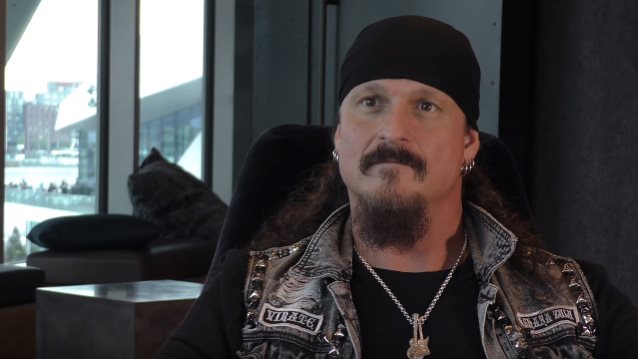 ICED EARTH guitarist and leader Jon Schaffer was recently interviewed by "Pod Cast In Stone". You can now watch the lengthy chat in three parts below. A few excerpts follow (transcribed by BLABBERMOUTH.NET).

On his recent revelation that ICED EARTH was going to be re-recording some of its early albums with the band's current lineup:

Jon: "As a fan, do I want IRON MAIDEN to go back and mess around with 'The Number Of The Beast' or METALLICA to change 'Ride The Lightning' or [BLACK] SABBATH to change 'Black Sabbath'? No, I don't, because I love 'em the way they are. But we're gonna dig back in to the catalogue and we're gonna do some re-recording and we're gonna do it with the muscle and the talent that's in the band now. And that's not a dig at anybody, because I've worked with amazing people through my whole career, and everybody's contributed. Even if somebody hasn't necessarily written songs, they're contributing, of course, 'cause they're performing. And those are two separate things. Sometimes the line gets blurred in the artist's mind of the difference between performing and the difference between writing, but there is a big difference. And everybody has done the best that they can through the entire catalogue, and it's great — there's been contributions from all. So I'm not one to sit back and say that I wrote everything and I do everything, even though people have accused me of that kind of attitude; that's not the case. Am I the chief songwriter? Absolutely. Am I the driving force of this band? Absolutely. And anybody that's worked around it knows that. And if they say anything different, then they're just lying. So it is what it is.

On Schaffer not owning the master rights to ICED EARTH's early recordings:

Jon: "The thing is, man, I will never own the masters for [early ICED EARTH albums released through] Century Media unless, all of a sudden, they develop a conscience and say, 'Jon should own his masters.' [Laughs] And believe me, Sony Records did not buy Century Media to start giving artists their rights back. So it's pretty unlikely. And, you know, it's business, and dude, hey, I signed, we all signed it — the original five guys from the first album, we all signed a very horrible contract. I just finished it. I went and pushed through to the bitter end."

On how ICED EARTH plans to release new music in the future:

Jon: "When we talk about the future for ICED EARTH and the model that we're gonna build for ourselves… Will I start a record label? Yes. Will it be a record label that signs bands? No. It's gonna be a record label that will deal specifically for ICED EARTH and for the projects that I'm involved in. Because through the tenacity of doing this for so many years, I've been able to build a brand, and I can protect that brand from this day going forward in a way that I've never really been able to before. I was gonna start a record company to sign young artists, the only way that I could profit is by fucking those artists over. Because the problem is now that the music industry, the way you sell music has collapsed so much — physical sales are down in everything, whether it's CDs… [they're] really on the way down. Vinyl, fortunately, for ICED EARTH, every album we've ever made has been [released] on vinyl. And the sales since probably, I'm gonna say 2011, it seems like there's a trend where vinyl sales are actually going up. It's not enough to save the music business as it was, but it is cool that people are, for one thing, rediscovering it, they're realizing how cool it is — that's great. But in the old days… back to the whole point of what I'm saying… 'cause I've had young artists and young bands ask me if I'm gonna sign any bands with this label, and I'm just not gonna do it, because I can't invest the time that it would take to run a record company. In the old days, they didn't have to fuck the artist — there was plenty of money coming in, because people were buying product. Now the majority of the income is coming from streaming, and that's a fraction of what it used to be. So you really have to take everything from the band if you're gonna make profit. Or you have to sign a hundred bands with a pretty shitty, mediocre deal, and how are you gonna staff all the people it takes to do that? You can't. That's why the indie labels are being gobbled up by the majors."

On whether he can ever see ICED EARTH signed to another record company in the future:

Jon: "It doesn't mean that I'll never work with a record company again, but it's never gonna represent anything like it did in the past — it's not gonna look like that. It would be as a distribution deal only. There's different concepts right now. It is literally like the Wild West in terms of how an established brand, which is what ICED EARTH is, can go forward and do business around the world — there's a lot of different options. And that's why we're not gonna decide anything right now. 'Cause [ICED EARTH's latet album] 'Incorruptible' has only been out for a few months, and we can easily wait a year, or a year and a half. And in that time, you'll see the physical market will crash at least another 20 or 25 percent, and you'll see more labels go out of business and you'll see more retail stores go out of business. It's changing, man, and it's changing rapidly, and it really started happening around 2008. And it's a double-edged sword, because it can be very good if you're in my position. If you're in the position of a very young band, it's never been easy to do this. But I don't even know how they're gonna get started, how a new band can actually do something and turn it into something big without just being completely raked over the coals. I mean, there will be guys that figure it out — trust me — 'cause that's the way humans work: when shit gets bad, we figure out a way. But I don't know what it's gonna look like. Nobody knows what the new model is. What I'm getting to is the only thing that I'm concerned with is preserving my brand and the projects that I'm in and how I'm gonna push forward so that the people around me are taken care of, myself is taken care of, the people that I'm in business with and, obviously, my family and these people, so that we can survive and thrive — not just survive, but thrive through the changing world of the music business. So it's an exciting time. I'm not afraid of it. I'm looking forward to it."

ICED EARTH signed with Century Media Records in 1990 and initially recorded six studio albums for the label over an 11-year period. In 2003, the group signed with SPV/Steamhammer, with whom they released three albums over the next five years. The group then signed a new three-album deal with Century Media in 2010, a contract that was fulfilled in June of 2017 with the release of "Incorruptible".