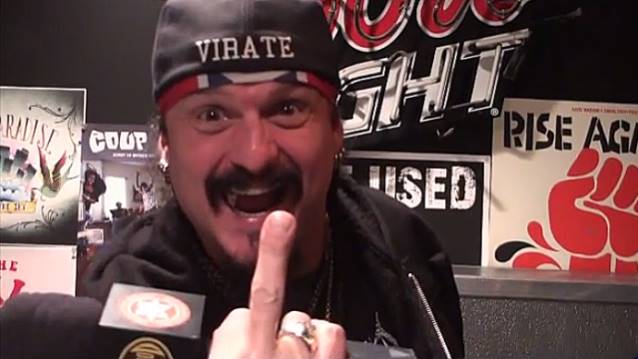 On May 14, Groovey of Groovey.TV conducted an interview with ICED EARTH guitarist/mainman Jon Schaffer at Summit Music Hall in Denver, Colorado. You can now watch the chat below.

Asked what he plans to do during ICED EARTH's break following the band's appearance at the Wacken Open Air festival in August, Schaffer said: "I have to have neck surgery. It's the second cervical fusion. I had the first one 14 years ago. And, ironically, we did Wacken, like, three and a half weeks after that, and I was in a neck brace and shit. But this time, there is no chance for me to do it and heal up through the summer because of what it takes. So, I mean, basically, early September, I'm going under the blade again and I'm gonna get this fixed. 'Cause it's rapidly gotten worse. I would say since the recording of [ICED EARTH's new album] 'Plagues Of Babylon' is when it really started to get bad. It's been bothering me for a long time, but now it's getting to the point where it's actually affecting my hands and my shoulders and it's really not good. A little break would be good, because it's not just the performing of ICED EARTH, it's the whole thing. It's a 24-7 job, so it's just gonna be good to be able to take a few weeks and not hear the words 'ICED EARTH' for awhile or anything and do some stuff with my daughter and have some good quality time. So that alone will recharge the batteries, let alone getting the neck situation fixed up."