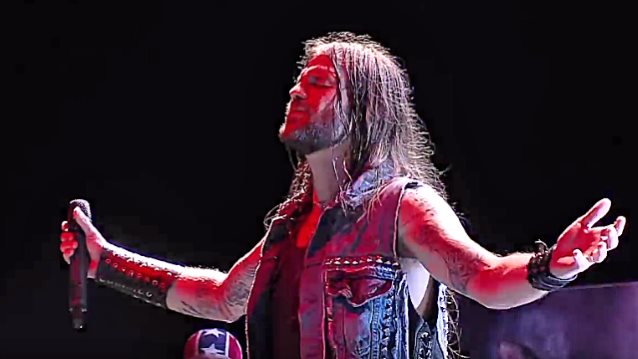 ICED EARTH's STU BLOCK On His Time With INTO ETERNITY: 'I Don't Think I Really Was The Singer I Could Have Been'

Josh Rundquist of That Drummer Guy recently conducted an interview with ICED EARTH vocalist Stu Block. You can listen to the full chat below. A few excerpts follow (transcribed by BLABBERMOUTH.NET).

On the writing process for the band's new "Incorruptible" album:

Stu: "This time around, there's always little differences in every writing process, every go-around. This one, this go-around, it was really cool. We got this new headquarters [in Indiana], Independence Hall, we have a new little studio that we built. That was really awesome. It was a little more comfortable in that aspect. It's always work, there's always lots of stresses. It was really comfortable in that aspect and it was really killer to be able to really focus on a lot of these individual songs and hit some individual subject matter and stuff like that. Hit on some really personal stuff, too. There was a lot of healing process. We took a little bit of time off. There was a lot of things that happened in our personal lives, in our camp, things we had to get off our chest. We had a lot of personal healing that we had done in between that time, too, a little bit more growing and all that kind of stuff. There's a lot of stuff we needed to get off our chest. There was a lot of differences there. I think all that became the perfect storm to come up with this album, 'Incorruptible'. We're really fucking proud of it."

On what the band went through leading up to the recording of "Incorruptible":

Stu: "There was a bit of a purging process because we fucking went through a lot. Between 'Dystopia' and 'Plagues Of Babylon', I think we played a million shows. [Laughs] Or something like that; totally exaggerating, but you know what I mean. We went through a lot. My mom passed away during the time, I got married and everyone else was going through all these other crazy, big life things. Man, it was crazy. To think back what we went through in such a short period of time, it would have killed most people. [Laughs] I'm pretty darn sure. There's been a lot of growing."

On his musical growth since joining ICED EARTH in 2011:

Stu: "I actually have grown quite a bit. As an artist, every artist looks back at their early years and they go 'Shit, I really sucked!' Or something like that. I look back all the time, even from day one, I'm like, 'Wow, I've grown quite a bit,' even from my first band, of course. Even from 'Dystopia'… See, when I was in INTO ETERNITY, I learned a lot from [INTO ETERNITY mainman] Tim Roth. He's an amazing songwriter, an amazing singer. He really taught me how to hone a chorus, how to write a catchy chorus, how to work with different riffs, how to work outside of the box, all that kind of stuff. I really learned a lot there. But I don't think I really was the singer I could have been. Then I joined ICED EARTH, then I started learning how to really become a singer and how to own the moment and how to embrace every word and own everything that I'm singing because it's a really important thing to own everything because people will notice that. They're going to notice if it's forced. Fans are not stupid, man. They are smart people. I know I'm a fan and when I'm at a show and I know that if a singer isn't owning it and he's basically faking it, I can tell. The singer is in the moment, not even just the singer, if the band is working as a whole unit and they're in the moment, they don't even have to be the best band. They don't have to be the best musical… have the best musical prowess, they don't have to be musical virtuosos, but if they're owning that moment and they're capturing my heartstrings, that's the best thing possible, honestly. That's what I learned, definitely, [ICED EARTH leader] Jon [Schaffer] has taught me so much, especially recording, how to be in the moment and how to really own everything and how to be myself. Even from 'Dystopia' to now, I think I've really grown into my vocals from 'Dystopia', I was just discovering things and I was playing it a little bit more safe, but now I'm really growing into what I want to do and I'm able to venture into different things and that kind of stuff. I think I've learned a lot working with Jon, just singing the ICED EARTH catalog. It teaches you some shit. I'm telling you. Singing [former ICED EARTH singer] Matt Barlow's stuff, singing [former ICED EARTH singer] Tim Owens's stuff, that will teach you some stuff, I'm telling you. I'm blessed to be able to do it and work with some of the best in the industry."

On whether it's more difficult to sing Barlow's material or Owens's:

Stu: "Both singers have their challenging songs for me, to be honest. I can't just tell you that Tim Owens's songs are more challenging than Matt Barlow's. They are both probably some of the most phenomenal metal singers out there. I can't really tell you that. I can tell you there are certain songs, like goddamn it, I don't like doing 'Ten Thousand Strong' sometimes, but I got to do it. Goddamn it, I don't like doing 'Wolf', but I got to do it. There's a lot of different ones on both sides of the coin that are difficult, but I love it because I love a challenge. I love a challenge. If I'm not being challenged, I think there's something wrong, if I'm not questioning, if I'm not learning something, if I sat here in this interview, and said 'I can do both perfectly. I can sing it all. I've learned everything there is to learn.' I may as well shut this computer off and end my career now because I'm never going to progress and I'm obviously living in a fucking dream world. How I feel, I want to learn all the time. I'm always constantly learning, I'm constantly being humbled by singers. We were just playing Sweden Rock [Festival]. Imagine sitting there listening to Myles Kennedy [ALTER BRIDGE]. Brother, that's a fucking humbling lesson right there. He's a phenomenal singer. There's a lot of people that you get humbled by, but it makes you fight more and makes you want to learn more. I'm into it. But yeah, both of those singers have their challenging ones, but I'm always up for the challenge."

"Incorruptible" was released on June 16 via Century Media. The cover artwork for the disc (as well as additional illustrations to every song) was created by David Newman-Stump from Skeleton Crew Tattoo (pencil illustrations) and Roy Young (colors).