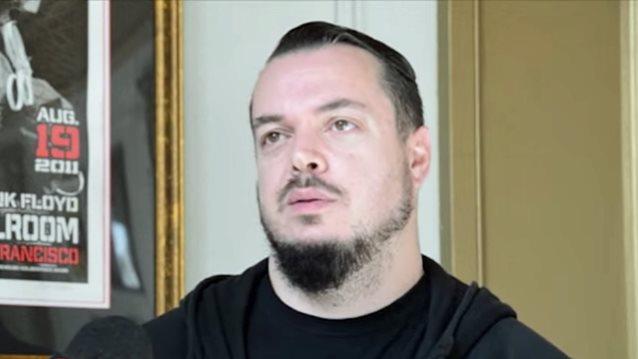 IGOR CAVALERA: SEPULTURA's Current Lineup Is 'Deteriorating' The Brand By Continuing Without Me And MAX

Greg RaMar of AntiHero Magazine conducted an interview with former SEPULTURA and current CAVALERA CONSPIRACY drummer Igor Cavalera on May 3 at The Regency Ballroom in San Francisco, California. You can now watch the chat below.

Asked if he is happy with how the SEPULTURA "book" is gonna end if the "final chapter" on the band has been written, Igor responded: "I'm not sure, man. I mean, things could change as far as… I don't know if, in the future, we're eventually gonna do the reunion [of the classic SEPULTURA lineup]. Right now, what I can say is me and [former SEPULTURA and current CAVALERA CONSPIRACY guitarist/vocalist] Max [Cavalera] are having a blast doing what we do with CAVALERA and also playing [songs] that we wrote when we were kids, like 'Troops Of Doom' and stuff like that, so I don't really see that [we] really, really need the reunion thing, where I know fans really wanna see that. But, for me, my personal reunion is me and Max; that's the core of the whole thing. That's how we started this whole thing and how we're gonna finish."

Regarding what he would personally like the SEPULTURA legacy to be, Igor said: "It's tough, because, of course, we're super proud of everything we've done with SEPULTURA. But I also… The little thing that bugs me is that I think they're [the current members of SEPULTURA] deteriorating the brand itself of SEPULTURA with fans by doing the tours and continue doing [it] without me and Max being there. So it's tough. But at the same time, [there's] nothing that we can do about it. We've gotta do what we do and keep playing."

Speaking about the prospect of a reunion of SEPULTURA's classic lineup, SEPULTURA guitarist Andreas Kisser told Capital Chaos TV on May 12: "I respect our past, but I'm not locked there; I'm not a prisoner of my past. I live the present very strongly, very intensively… But I respect the past and live the present intensively so we have a future, and not really be there trying to replicate or reproduce or copy stuff that it doesn't happen anymore.'

He continued: "I have great memories working with [Max and Igor], and we really did something really special, but they chose to leave a long time ago — Max in 1996, Igor ten years later, in 2006 — and I guess they're happy with their choice, and we had to deal with the good and the bad stuff of that choice. Max, when he left, he took the management, he took all the structure that SEPULTURA took ten years to build he took all the structure that SEPULTURA took ten years to build — the bridges of trust and confidence with the label and booking agent and the press. And it really showed us the bad guys of the situation, and Max took advantage [playing] the victim and stuff. But we passed over that. It's something that was really healthy for us, because we learned so much about business and management, and how to take care of your own stuff. And we are in a much better place now; I mean, there's no doubt about it. At the same time we were playing arenas and selling lots of albums [at the end of our time with Max], our situation backstage was pathetic; it was like a kindergarten, [like] kids fighting for candy. It was a very stupid situation. But, like I said, we are in a much better place, and now we can enjoy ourselves and go on stage and look to each other's face and really respect each other on stage. We're not doing it for money only."

Kisser added: "People [who are pushing for] a reunion, whatever, have this concept of SEPULTURA playing for money, and it's not gonna happen. I'm not gonna be a part of something that's gonna cheat our fans and that's gonna cheat myself. I'm not leaving my house, my family and my kids just to be a clown on stage. I'd rather be what I am, and if you like it, fine; if you don't like it, fine as well. I mean, you're free to do whatever you want; we're not forcing anyone to like or hate us.

"But I think that's art in general. We dealt with that throughout our whole career, regardless of the formation. I think SEPULTURA is moved by challenges, and we still have so many. We just came from Rock In Rio [USA] in Las Vegas, playing with Steve Vai. It was an amazing challenge that we grew up so much, as people, as musicians and as a band. It's an amazing thing that we still have this kind of opportunities after thirty years and we're still doing something new instead of trying to reproduce that stuff, just for a few people that think they know more about SEPULTURA than ourselves."