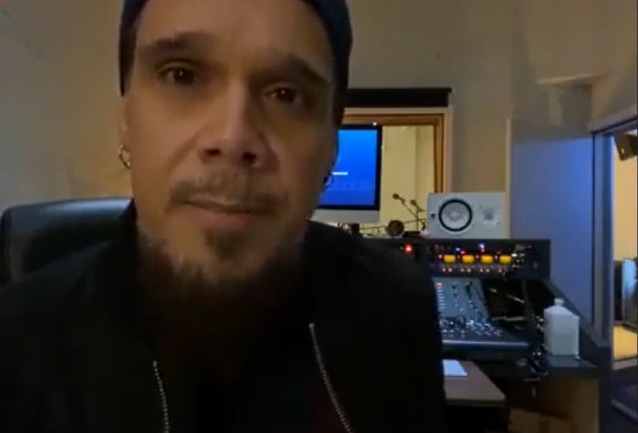 ILL NIÑO's longtime bassist Laz Pina says that he "wasn't impressed" with the sample of music he has heard from LIONS AT THE GATE, the new group launched by some of his former bandmates.

LIONS AT THE GATE features ex-ILL NIÑO members Cristian Machado (vocals),Ahrue "Luster" Ilustre (guitar) and Diego Verduzco (guitar). LIONS AT THE GATE has released two singles so far, "Scapegoat" and "Not Even Human", with the band's debut album tentatively set to arrive early next year.

Pina discussed Machado, Ilustre and Verduzco's new project while speaking to Pierre Gutiérrez of Rock Talks. Asked if he has heard any of the music LIONS AT THE GATE has released so far, Laz said (as transcribed by BLABBERMOUTH.NET): "I heard very little of it. It doesn't really catch my attention. I've kind of moved on from that. All I can say is I wish everyone the best. Do your thing; we do our thing.

"People are always telling me, 'Did you hear what they said?' And I always say, 'I've moved on.' It really doesn't even pertain to me.

"We left in a very weird way, when those guys split," Laz explained. "When you start to develop a friendship and a brotherhood, you don't expect these things to occur the way they did. What they did was, in my opinion, so ugly and such a back-stabbing [move]. And then going out there and making it seem like they were the victims and we were kind of abusing them. That was not the case. It was just a straight up — trying to shake us down. I don't know what people were thinking. And I hear a lot of sentiments.

"All I've gotta say is this: you do your music; I do mine. You wanna keep running your mouth and talk about us, that's your problem. If you don't wanna let go, that's your ego. That's what I hear all the time — about egos. It's not about egos on this side; it's all about music and it's also about a strong, unshakeable friendship and loyalty. Some of us that made that decision to stick together, we're just not that kind of people that would treat other human beings that way.

"Like I said, I don't even really have an interest in listening to it, honestly," Pina continued. "I might have heard a couple of seconds and I wasn't impressed. It sounded like something I heard from the 'Dead New World' record [ILL NIÑO's fifth album, released in 2010], when that style of writing was going on. I think that's what they sound like if it wasn't ILL NIÑO's input of what the true meaning of what ILL NIÑO is to this band.

"So let the music do the talking. And I wish everyone well. Everyone can do their thing. And move on already. Live in the now.

"I try not to ever even bring it up in conversation," Laz added. "I never really talk about it. So it's time to move on. And I have no hard feelings. I like who we are. I love the band. I love playing with the guys I'm playing with right now. And I think that we're really doing something very special. And to be quite honest, I think that we lost a lot of that specialness in the last several years. So maybe it was time to move on, but it shouldn't have been the way it did with this falseness of trying to paint the picture to destroy the name of the band. It wasn't the way you treat your family. So I'm a little disappointed in that. I honestly have no hard feelings. My life is great. And I think that my band is great. My band is greater than ever. And we love what we're doing.

"And with that said, I just say this: let the music do the talking."

Laz's latest comments come nearly three years after he and drummer Dave Chavarri announced that they had recruited vocalist Marcos Leal (SHATTERED SUN),lead guitarist Jes DeHoyos (SONS OF TEXAS) and rhythm guitarist Sal Dominguez (UPON A BURNING BODY) to be in their new incarnation of ILL NIÑO. The Chavarri-led ILL NIÑO also issued a new single, "Sangre". A day later, Machado, Ilustre and Verduzco dismissed reports that they had left ILL NIÑO and vowed to continue with their own version of the band. Two months later, the trio filed a lawsuit against Chavarri and Pina, accusing the drummer and bassist of failing to pay the band's tour rental company and engineers, slandering Machado by spreading rumors that he has a drug problem, collecting and spending the band's money without consulting in all of the members and refusing the members access to the group's financial records.

In March 2020, Machado, Ilustre, Verduzco, Chavarri and Pina announced that they had "reached a mutual, amicable and binding agreement" that will allow Chavarri and Pina to continue with ILL NIÑO while Machado, Verduzco and Ilustre will move on with new projects. According to a joint statement release by the five musicians, "No party has admitted fault and there has been no court judgment on the merits. The parties entered into a confidential settlement agreement."

A year ago, Machado commented on "Sangre", the first single released by the revamped version of ILL NIÑO, saying: "I hope they find their way. That's all I can say. And that's not to say that they won't. All it takes is great songwriting talent. That's the first thing that it takes. Well, technically, first you are a musician, and you have to have some kind of understanding of songwriting. If you can understand what connects with you, then you can understand what connects with people. And they might find their way; they might not. All I can say is it doesn't sound like they found their way yet.

DeHoyos recently left ILL NIÑO to focus on his family life. He has since been replaced by a returning Marc Rizzo, formerly of SOULFLY.