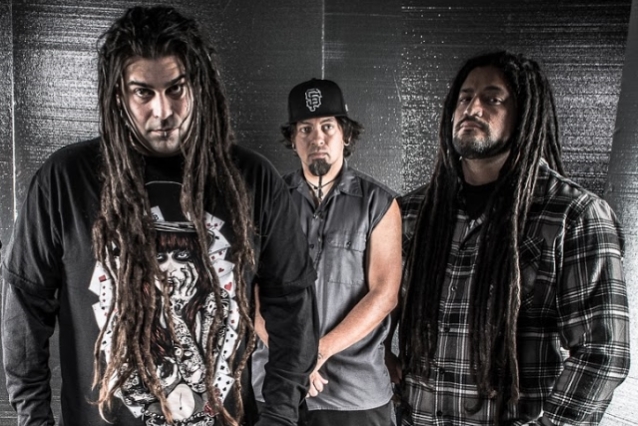 Vocalist Cristian Machado, lead guitarist Ahrue Luster and rhythm guitarist Diego Verduzco have dismissed reports that they have left ILL NIÑO and have vowed to continue with their own version of the band.

The trio broke their silence one day after drummer Dave Chavarri announced that he and bassist Laz Pina had recruited vocalist Marcos Leal (SHATTERED SUN),lead guitarist Jes DeHoyos (SONS OF TEXAS) and rhythm guitarist Sal Dominguez (UPON A BURNING BODY) to be in their new incarnation of ILL NIÑO. The Chavarri-led ILL NIÑO also issued a new song called "Sangre".

Earlier today, Machado released the following statement to BLABBERMOUTH.NET: "To all our family, friends, and fans, contrary to what you may have heard, Ahrue, Diego and I have NOT left ILL NIÑO and remain very dedicated to the band and all our fans. We're excited to be working on new music, partnerships, and opportunities. We will have more info for you all soon."

Public records indicate that Machado, Luster and Verduzco — comprising the majority of the band's company, Ill Niño LLC — filed a trademark application on November 6, 2018 in the United States to gain protection for the ILL NIÑO name. One week later, Pina filed a request for express abandonment "without the authorization, knowledge and consent of the LLC." According to Machado, Luster and Verduzco, the request for express abandonment was submitted in bad faith with the purpose of assisting Chavarri claim sole ownership of ILL NIÑO. Chavarri had filed, shortly after the LLC, a separate application alleging that he alone is the owner of the mark ILL NIÑO. Machado, Luster and Verduzco have since petitioned the director of the United States Patent and Trademark Office to withdraw the express abandonment filed by Pina and reinstate the LLC's original application.

In 2016 and 2017, the band celebrated the fifteenth anniversary of its debut LP, "Revolution Revolución", with European and Australian tour dates.