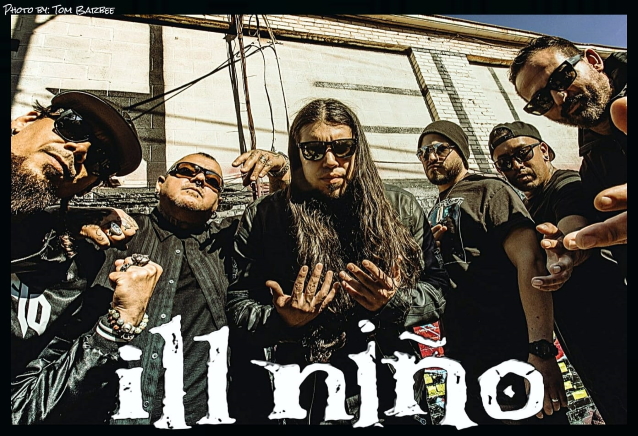 ILL NIÑO's New Lineup Is Back With 'Máscara' Single/Video

"I'm very stoked to introduce 'Máscara' as a great addition to the ILL NIÑO legacy, and a highlight of my vocal career," commented Leal. "I'm honored to have collaborated with our very good friend and one of my favorite vocalists in the game, AJ Channer of FIRE FROM THE GODS.

"As someone who's grown up as a fan of ILL NIÑO, and growing up as a musician inspired by the band, I take pride and honor in crafting the vocals for the next generation. Something fans new and old will appreciate, and look forward to throwing some chingasos in the pit with our NIÑO Familia in 2021!"

Channer added: "ILL NIÑO are a band that will leave a strong lasting legacy on heavy music. Some of my earliest show experiences were ILL NIÑO shows. To be able to lend my voice to one of their songs includes me in that legacy. I was more than honored to sing on 'Máscara'. 'Nuff love to those dudes."

ILL NIÑO's new LP will mark the band's first release since the departure of vocalist Cristian Machado, lead guitarist Ahrue "Luster" Ilustre and rhythm guitarist Diego Verduzco. Machado, Ilustre and Verduzco, along with Chavarri and Pina, announced in March that they had "reached a mutual, amicable and binding agreement" that will allow Chavarri and Pina to continue with ILL NIÑO while Machado, Verduzco and Ilustre will move on with new projects. According to a joint statement release by the five musicians, "No party has admitted fault and there has been no court judgment on the merits. The parties entered into a confidential settlement agreement."

During a November 15 Facebook Live chat with The New York Hardcore Chronicles, Chavarri stated about ILL NIÑO's recent lineup changes: "When all this went down, Laz and I had taken the high road and been classy about it and not really spoken out. We think it's weak to go out there and badmouth somebody and spread half-truths and play the victim and try to get attention. That's not what we wanna do. We wanna keep it positive. The band is doing better than ever. We have a full album that's recorded. We're in the process of mixing right now. We're shooting multiple videos from the new album. We're shopping a deal. We have about three to four label deals that our lawyer is actually going through at the moment."

Regarding ILL NIÑO's new members, Dave said: "We were very fortunate to get the best guys in the band. We've got Marcos Leal, who also sings for a band called SHATTERED SUN. A great kid, man. Fucking hungry as fuck to get shit done. But very, very on top of his game. He's a fucking star from beginning to end. But the best part of it all is that he's such an easy guy to work with. He's so into the music, and he's so passionate about the business, and that's half the fucking battle. When you lose your passion… I can't work with people that aren't passionate about what they do anymore, and that was one of the biggest reasons for the lineup change. We've got Jes DeHoyos on lead guitar, who also plays in another band called SONS OF TEXAS, and Sal Dominguez, who used to be in UPON A BURNING BODY. We had the pleasure of hanging out with him on Mayhem festival when we toured with those guys, and it was fucking hilarious. We had a lot of fun with those guys. We love UPON A BURNING BODY — a great fucking band. And we revamped the lineup, man. This is the new lineup."

He continued: "The one thing about this lineup is that we're here to elevate each other. We're not here to put each other down or point fingers. This band elevates each other. Every single member in this band is so important to the puzzle right now, because we all feed off each other. We all speak on a daily basis. I talk to every bandmember practically every single day, and that's something that was missing — the disconnection that I had with the last lineup. It was a disconnection that actually started about seven years ago, and it just got progressively worse.

"Listen, sometimes you have to go through shit like that to be able to step into a positive light and into a better situation," Chavarri added. "And that's the way life is, right? It throws you some fucking fucked up shit along the way so you can come out and blast it off with what you've got going on now."

Back in January 2019, Chavarri and Pina announced the new version of ILL NIÑO and issued a new single, "Sangre". A day later, Machado, Ilustre and Verduzco dismissed reports that they had left ILL NIÑO and vowed to continue with their own version of the band. Two months later, the trio filed a lawsuit against Chavarri and Pina, accusing the drummer and bassist of failing to pay the band's tour rental company and engineers, slandering Machado by spreading rumors that he has a drug problem, collecting and spending the band's money without consulting in all of the members and refusing the members access to the group's financial records.

Last month, Machado commented on "Sangre" in an interview with Hablas Rockas, saying that "it doesn't sound like" ILL NIÑO's new lineup has found its way yet. "I hope they find their way," he continued. "That's all I can say. And that's not to say that they won't. All it takes is great songwriting talent. That's the first thing that it takes. Well, technically, first you are a musician, and you have to have some kind of understanding of songwriting. If you can understand what connects with you, then you can understand what connects with people. And they might find their way; they might not.

Machado recently confirmed that he is working with Ilustre and Verduzco on a new project. The as-yet-unnamed group has already completed an album's worth of material for a tentative 2021 release.