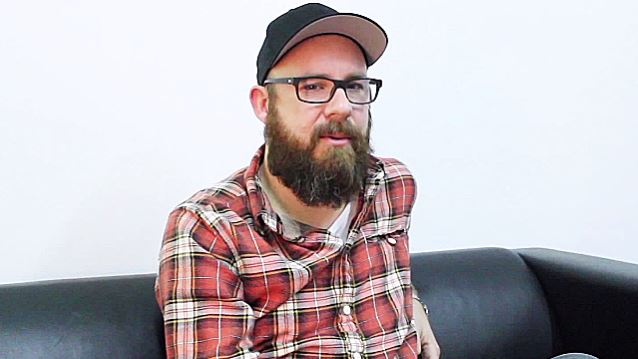 Dearly Demented conducted an interview with vocalist Anders Fridén of Swedish metallers IN FLAMES when the band played at Jahrhunderthalle in Frankfurt, Germany on October 24. You can now watch the chat below. A couple of excerpts follow (transcribed by BLABBERMOUTH.NET).

On whether IN FLAMES guitarist Niclas Engelin had any influence on how the band's new album, "Siren Charms", turned out:

Anders: "He has an influence being the person that he is. He brought a lot of good vibes and great energy into the band when he joined us for real. He hasn't been writing any music — it's still Björn [Gelotte, guitar] and me that are doing those things — but he's been recording on this album, he's been playing guitar on this album. And he has a certain style, he has a certain way of picking, which differs from Björn's way, and that obviously had an impact on the album, how it turned out. But writing, it's still Björn and me."

On whether he thinks Niclas will contribute to the songwriting process in the future:

Anders: "I don't know. I mean, we'll see. He's as big a part of the band as anyone else, but me and Björn have been doing this for quite some time — we've been part of ten of the eleven albums. You can hear when Niclas is writing a hundred percent, like he does for [his other band] ENGEL; it differs."

On IN FLAMES' decision to film a new concert DVD/Blu-ray on November 6 at Hovet in Stockholm and November 7 at Scandinavium in Gothenburg, Sweden:

Anders: "[Gothenburg is] the biggest show on the tour, and it's our home country. The city of Gothenburg has given us a lot through the years, and we would like to give something back and kind of document where we started. Even though we didn't start in this big arena — we started in a very small place — but it's like coming full circle in a way."

"Siren Charms" sold around 9,000 copies in the United States in its first week of release to debut at position No. 26 on The Billboard 200 chart. Released in the U.S. on September 9 via Sony/RED, the CD was recorded at Hansa Tonstudios (DAVID BOWIE, DEPECHE MODE, U2) in Berlin, Germany. The cover artwork was created by Blake Armstrong of Space Boy Comics.