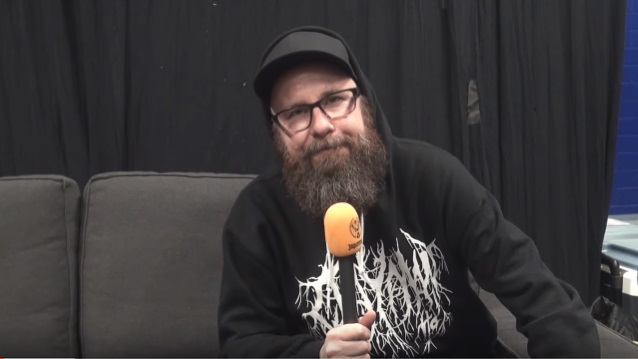 IN FLAMES singer Anders Fridén says that he finds it "stupid" when fans watch entire concerts through their cell phones but insists that he "would never throw them out" of the band's shows because of it.

A PERFECT CIRCLE made headlines earlier in the month when more than 60 people were forcibly removed from the band's concert in Reading, Pennsylvania for taking pictures during the performance in violation of A PERFECT CIRCLE's super-strict "no photos" policy.

During an interview with Finland's Kaaos TV conducted before IN FLAMES' November 14 concert in Helsinki, Fridén was asked if he is "bothered" by the sea of cameras and smartphones he faces during live appearances. "Well, 'bother' is not the right word," he replied. "I think it's… Honestly, I think it's stupid, in a way. They paid a lot of money to be [at the show], but I would never throw them out. But I do say it pretty much every show, 'Focus on the people up on stage instead of us through the lens of a camera.' As I said, [fans] paid a lot of money to [at the concert], and it's live music. But I also get that people are extremely eager to get, like, a memory and someone may wanna put something on the phone or on YouTube or update whatever thing they need to. And I would never go as far as [to] throw anyone out or judge them. I can only address it and say, 'Hey, maybe you think about just putting that phone down for a while.' But at the same time, I was with my daughter at another show the other day, and she's 13, and her whole generation, they're just sitting by the phone and are watching and filming and whatever. So, I mean, it is what it is. I can't do anything, and I won't do that much about it."

A PERFECT CIRCLE guitarist Billy Howerdel told Billboard the band's "no photos or videos" policy has been a longstanding one for singer Maynard James Keenan and explained some of the reasons behind it. "The most important thing nowadays is just to reconnect. To actually be present is really tough for people nowadays. Everything is so immediate, and I think if you look at that as a mentality in general, it starts coming into the show. First and foremost is it's just rude to the people around you."

Howerdel added: "I think at the end of the day it's time to just disconnect for a second. The videos that you take and for your own benefit, you put online — they look like shit and they sound like shit. We'd rather you communicate this orally; let people know what you saw and how you felt. It's much more powerful than giving a bad representation."

Keenan has practiced the same policy with his other bands, TOOL and PUSCIFER, recently telling a fan online, "No. Recording. Of. Any. Kind. For. 25. Years. Guided experience. Unplug and enjoy the ride."

IN FLAMES has just kicked off a European co-headlining tour with FIVE FINGER DEATH PUNCH.

The Gothenburg, Sweden-based outfit is touring in support of its 12th studio album, "Battles", which was released in November 2016 via Nuclear Blast in all territories excluding North America and Scandinavia and Eleven Seven Music Group in the U.S.