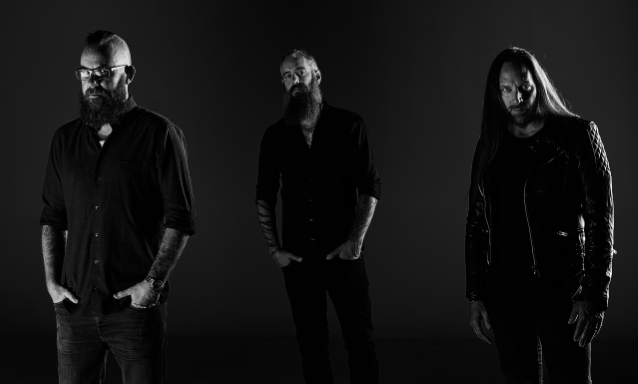 IN FLAMES To Release New Single And Video, 'I Am Above', Next Month; Teaser Available

Swedish metallers IN FLAMES will release a new single and video, "I Am Above", on December 14. The clip was once again directed by Patric Ullaeus of Revolver Film Company, who has previously worked with DIMMU BORGIR, LACUNA COIL, AMARANTHE and KAMELOT, among others.

A teaser for the "I Am Above" video is available below.

IN FLAMES recruited American drummer Tanner Wayne, best known for his work with UNDERMINDED, SCARY KIDS SCARING KIDS and CHIODOS, to sit behind the kit for the band for its 2018 live appearances.

Wayne stepped into IN FLAMES following the apparent recent departure of Joe Rickard, who played on the band's 2016 studio album, "Battles".

Tanner made his live debut with IN FLAMES in July in Brno, Czech Republic.

In a recent interview with Mexico's Etic's Live, IN FLAMES vocalist Anders Fridén stated about the band's current plans: "We released an album called 'Battles' and that was released two years ago, I think. We are working on something, and people who know what we sound like today will definitely recognize it, but there are elements there that will feel a little bit new here and there. With IN FLAMES, we don't want to change it too much, but we want to change a little from album to album. It's still important for us to have the melody, that's the first thing. We grew up on melody and melody is everything for us. Then you can do a lot of things, of course. It's very melodic and heavy at the same time."

Regarding IN FLAMES' knack for integrating different styles into the band's music, Anders said: "I see it as a natural evolution. You can only do so many riffs on the guitar. It's all about notes in a different order and a lot of things has been done, but you're taking influences from here and there and you mix it up and make it your own. That's how the music develops. I really think that we all fit within this. Then, it's obviously up to the audience if they're open-minded enough. Can you mix classic with more than the heavier, can you do this and that? In my opinion, good music is good music. You can do that. I like bands that try to take something and move it forward and mix and match from different outlets. That's progress. In my world, there are no different genres, just good music and bad music."