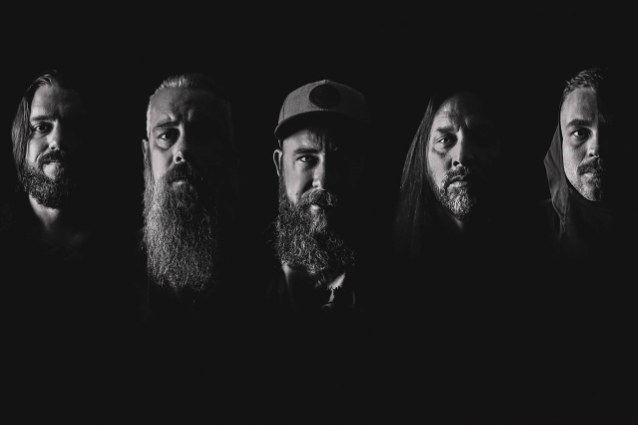 IN FLAMES Vocalist ANDERS FRIDÉN On Professional 'Marriage' With Guitarist BJÖRN GELOTTE: 'I Need Him; He Needs Me'

IN FLAMES vocalist Anders Fridén recently spoke with PureGrainAudio. The full conversation can be streamed below. A few excerpts follow (as transcribed by BLABBERMOUTH.NET).

On whether the singles released to date from the group's new album, "I, The Mask", are representative of the record as a whole:

Anders: "I think the songs that we have now, it's a good presentation of what's to come if you haven't heard the album or if you're new to IN FLAMES in general. There's the fast-paced [song]; there's the melodic [song]; there's the heaviness and the big choruses and all that stuff. It's sort of the essence of IN FLAMES."

On his working relationship with guitarist Björn Gelotte:

Anders: "From 'Siren Charms' and back, it was always the music was done first. I did all my vocal melodies and all the lyrics behind closed doors, and then I presented [them] to the other guys in the mix, and there was no saying about anything — it was, like, 'This is it. I hope you guys like it.' Now, me and Björn, we are in the same room. Last time, we rented a house, and this time, we rented another house, and we built up a small writing studio, so we are there working through everything. I'm involved in the music and he's part of, not so much the lyrics, more the melodies and how we create the melodies and the feelings of it. When we write, it's usually lyrics that [don't] make sense, but they're there to get the phrasing, the tempo, the melody. Then I rewrite the lyrics so it makes some sort of sense. I think we've found a formula that really works. I need him; he needs me. It's a marriage that really works, and that becomes IN FLAMES. It [hasn't] been bad in the past at all, and the music that we created through the years are great and we had a good time, but I think every member has been a little bit like, 'This is my area. Don't even try to step into this, because this is mine. I own this,' and now it's more a free-floating entity."

On whether the band makes a conscious effort to make "uplifting" music:

Anders: "I think it just happens, really. I get inspired by the environment I am [in] when writing an album. When we did 'Siren Charms', we were in Berlin. It was cold [and] dark; it was November. I think that album has a certain melancholy to it. Being in Los Angeles when there's sun, good beers and nice barbecue around it, that gets into the album somehow, even though we don't write about barbecuing and sun. I think IN FLAMES are known for the combination between melody and aggression. We try to bend and shape our sound around that. Then we can take it far left, far right, whatever — but that's still the essence. I feel this album is more uplifting in tempo and production. We don't have big meetings prior to albums — we don't say, 'Let's do this direction' — but something that we talked about was [that] we wanted to bring the guitar a bit more forward in the production, in the mix, and I think we achieved that. I think Chris Lord-Alge did an amazing job [mixing]. The album sounds the way I wanted to sound. I'm very pleased with the result."

Anders: "It's my instrument, and I want to take it as far as I can. I'm not trying to be the best singer. I'm not going to apply for 'The Voice'. It's just for my own good, and it's good for me and Björn when we write to know what sort of range I have. I have expanded the possibility of me to get higher up in octaves or in notes. I got to know my vocal coach during 'Battles'. Howard [Benson, producer] asked me, 'What do you think about taking some vocal lessons?' I was sort of against it at first, because I could see me standing there doing, 'La-la-la' next to a piano. That's nothing for a heavy metal singer, but when I went there and we talked and he got to know me and I got to know him, and he knew where I was coming [from] and what I wanted to do, we formed a really good relationship. We took it further this time around. I went to him, like, three, four times a week during three months. It really helped, and it improved what I can do with my voice, and how I master my own instrument."

On whether he prefers clean or more aggressive vocals:

Anders: "I love both. In studio, I think it's more fun to sing clean. Live, I love to scream, because then you get the energy from the crowd. You have all these people screaming in your face versus, like, a dead microphone in the recording studio. I like both, and I think it gives IN FLAMES another dimension if I can blend it back and forth. Nothing is written in stone prior – it's not like I say, 'Okay, this song has to have clean vocals.' It all depends on the music that we write and what I should add on top. It's like finishing a painting in a way — you need to use certain colors to bring out whatever it is."

On facing perpetual criticism from longtime fans who want the band to return to their "classic" sound:

Anders: "It doesn't bother me. I'm happy that people care. That's better than the opposite... I can't let it get to me, because I don't write music for a certain type of fan, a certain type of person. I write music for myself, that I like, and then it's up to people to take it and do whatever they will. If we would listen to what everyone had been saying about us in the past... [we] would be so crazy. I have my Instagram, but that's it. I don't really read comments. I don't have Facebook. I love the face-to-face reaction of fans that I meet when I'm out playing, and most of them are very happy and don't really say anything about my faults."

On whether he still enjoys touring:

Anders: "I love it even more now, because now I cherish the moments that we have. It's crazy that we've been doing this for such a long time. Without the fans, there wouldn't be an IN FLAMES. I love being in the band with the people that we are right now... I think we sound better than ever. That doesn't mean we didn't sound good in the past, [but] with members leaving and so on, we've always been lucky with the replacements. I truly, truly enjoy being on the road."

"I, The Mask" will be released on March 1 via Nuclear Blast (worldwide, excluding North America) and Eleven Seven Music (North America).