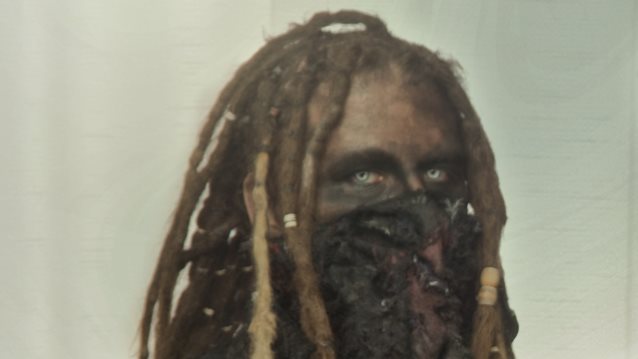 IN THIS MOMENT Guitarist On Having ROB HALFORD Sing On 'Ritual' Album: He's 'Such A Pro'

Metal Wani's Chuck Marshall and Barrett Stephens recently conducted an interview with IN THIS MOMENT guitarist Chris Howorth. You can now listen to the chat below. A couple of excerpts follow (transcribed by BLABBERMOUTH.NET).

On whether the more raw and organic sound of IN THIS MOMENT's new album, "Ritual", is an indication of the band's future musical direction:

Chris: "As far as the future direction, that's really hard to say. We kind of just fly by the seat of our pants and don't really have a set plan or whatever when we're going in, or what the future of the band's gonna be. We kind of just see how we're feeling at the time. This time, it wasn't really like we were gonna try to make a more stripped down album. I know people have been saying [that the new record is more] 'stripped down,' and it definitely has a lot less of the kind of campy… I'm not dissing on any of our old stuff, but it's a little bit more serious. And when I say 'stripped down' too, I guess… One way to describe it is, before we would write the songs and not think about how they were gonna be live — we wouldn't even care. It was about writing the best songs, the most cool stuff, push the boundaries. And this time we were kind of, like, as we were doing it, we were, like, 'We're gonna be playing this song live. We know we're gonna play this one live. Let's make it a good live song too. So let's think about the guitars more and what are they gonna be.' It just kind of lent itself to being a little bit more organic, I guess, in that sense, once we started doing that, just thinking about the songs being played live."

On how IN THIS MOMENT got JUDAS PRIEST singer Rob Halford to guest on the new song "Black Wedding", which is featured on "Ritual":

Chris: "Maria [Brink, IN THIS MOMENT frontwoman] was doing the lyrics, and it's almost like a duet, but she's singing to herself with the mother and the priest. [And we thought] Rob Halfordis the priest, and he would be the coolest dude ever to have on this song. A couple of years ago, he actually expressed interest in our band and came to see us. It blew our minds completely. We were, like, 'Oh my God! I can't believe it. He's really gonna come see us.' And he actually did come see us. And we kind of became friends with him from that point. He's been super influential to us, and even Maria. He's always been into the theatrics, with the whips and the bike and all this stuff. And when we were doing the song, Maria was, like, 'I'm gonna see if Rob's interested in doing this', and he jumped right on it. And it's so cool to have him on this song with us, man… Unfortunately, we weren't [in the studio] when he was there [laying down his vocals]. It was right at the end. We had done all of our parts, and we left, and he came out two days later and tracked his parts with [producer] Kevin [Churko]. So we didn't actually get to hang out with him when he did it, but we saw pictures. He's actually worked with our producer Kevin before; he did that FIVE FINGER DEATH PUNCH song 'Lift Me Up' with him. So he knew Kevin, and it was real easy. [He's] such a pro, man."

On how he feels "Ritual" turned out as a whole:

Chris: "I'm really happy with how it turned out. It's such a mental, mindblowing thing when you're trying to write an album. You're so self-critical of everything and you listen to everything so many times, you almost lose sight of anything. But after having sat with it and everything, I really, really like it. I feel like our fans are really gonna like it. We've delivered a little bit more of what our fans want. And some of our favorite tracks are 'Roots', obviously, [which] I'm really happy about; I love that song. And I can't wait for people to hear 'Black Wedding'. And I think there's a lot of other ones, too, that our fans are really gonna dig deep and get into. So I'm stoked on it."

"Ritual" will be released on July 21. The group's sixth studio effort will be made available by Atlantic Records in partnership with Roadrunner Records.

One of the album's highlights is a dramatic reimagination of the Phil Collins classic "In The Air Tonight".